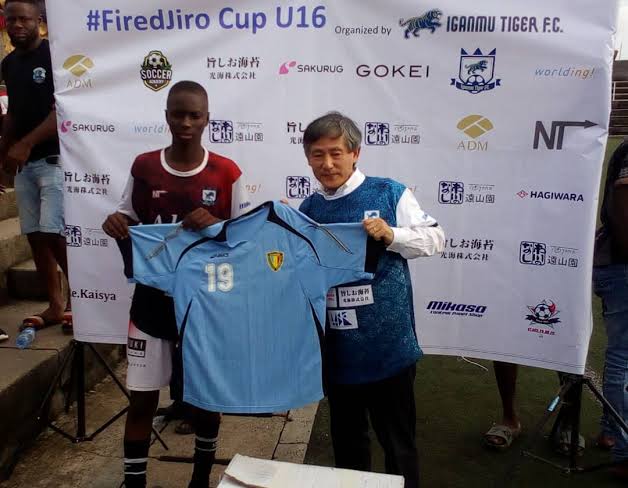 The good diplomatic relationship that exists between Nigeria and Japan has been further strengthened through football following the cementing of relationship between Japanese Embassy and National League Division 1 ( NLO) side, Iganmu FC.

This was done Sunday at the Legacy Pitch of the National Stadium, Surulere, Lagos during the finals of the maiden edition of #Firediro U-16 Cup.

Speaking at the event, Japanese Ambassador to Nigeria, His Excellency, Yoshi Matsunaga explained that although both countries enjoy good bilateral relationship but it has become necessary to beyond trade and encourage Nigerian football development which boosts of many talented players.

According to him, Nigerian football is popular among Japanese and presently there are seven Nigerians playing in the J- League even as he promised that the video clip of the match will be sent to Japanese fans through facebook, instagram, youtube, twitter and other social media platforms to keep them abreast of what is happening in Nigerian football.

“Football is a very popular sports in Japan and Japanese remember the exploits of Super Eagles at Korea/ Japan 2002 World Cup. They have special interest in Nigerian players who they know have raw talent and skills.

” At the end of this tournament, I will send the video clip of the match to Japanese fans through social media network for them to see what is happening here because football is a global sports”, he said.

Meanwhile in the final game, Iganmu Tigers FC defeated Stars To Be FC 3-0 to emerge winners of the tournament which also serves as a sent forth game for Iganmu Tigers who will be embarking on a training tour of Italy in October this year.

The event attracted many fans, diginitaries and friends of President of Iganmu FC, Abayomi Egbayelo who is based in Japan.