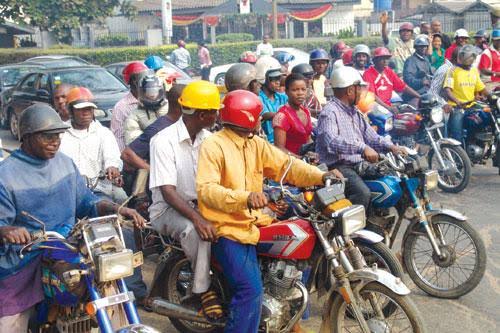 Worried by the recent threat to ban their operations, motorcycle operators under the umbrella of the Almalgamated Commercial Tricycle and Motorcycle Owners, Repairs and Riders Association of Nigeria, ACOMORAN, have told the Federal Government to jettison the idea and concentrate on rejiging the security architecture of the country.

The operators who spoke to journalists on Monday in Abuja, warned that the proposed ban of commercial motorcycles as part of measures to tackle security challenges, will throw another 40 million Nigerians into joblessness, and further create a worst monster than terrorism.

National President of the group, Samsudeen Apelogun, told newsmen that their membership base stands at 12 million nationwide, with six million adequately registered, adding that the idea of banning the use of motorcycles nationwide would be counter productive in the long run.

“Without any attempt to join issues with the Honourable Minister and working with his statistics, the Council is proposing to put an end to the means of mobility and source of living of forty million Nigerians directly.

“Painfully, these are people whom the government failed to provide with meaningful employment or any form of sustainable empowerment, even though many of us are well read with families and other dependents,” he added.

Apelogun further warned of the economic and security implications. He observed that the government lacks an effective security architecture, hence, efforts should be Channels to overhaul their intelligence gathering mechanism, rather than creating another monster that will ultimately add salt to the injury.

“Commuters see motorcycles as a relief to their transportation problems while motorcycle riders see their adventure as a source of livelihood. Without a doubt, the use of motorcycles has enhanced mobility for the middle and income earners which by extension has contributed to an increase in production through an increase in man hours.

“If ten million of these 40 million people they plan to render jobless take to crime, can the government contain them? If you attribute the movement of terrorists to motorcycles, don’t criminals operate with vehicles? When terrorists regrettably attacked Kuje prison, was it the motorcycle riders that caused the failure of intelligence gathering?

“If the security architecture is not working, the government should rejig it or do a total overhauling instead of blaming motorcycle operations for the failure of security agencies, thereby creating another monster that will ultimately add salt to injury,” the group noted.

It would be recalled that the Federal Government through the Attorney General of the Federation and Minister of Justice, Abubakar Malami, had announced that the National Security Council, chaired by President Muhammadu Buhari, may be compelled to ban the use of motorcycles and mining activities as it has been discovered to be a major means of movement by bandits and source of amassing ransom from kidnap victims.