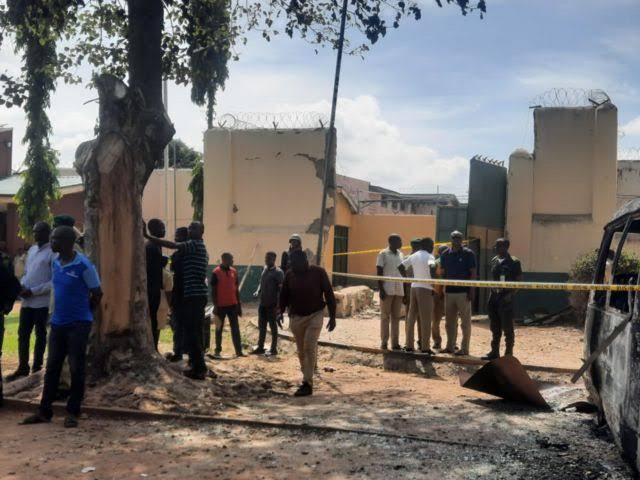 *Says I’ll be frank with you, I went through DSS report, 44 of them were given before attack

*Regrets that reports were not acted upon by the relevant authorities

As Nigerians continue to wonder how possible it was for bandits to successfully break into the Kuje Correction Centre and release over 800 inmates including Boko Haram members detained there, the Deputy Speaker of the House of Representatives, Hon Idris Wase yesterday made a startling revelation that 44 security reports were received before the attack.

The Deputy Speaker who spoke while contributing to a motion on planned ban on operators of commercial motorcycles popularly known as “okada” by the federal government nationwide moved by Hon Abubakar Maki Yellaman at yesterday’s plenary said the reports were not acted upon.

It would be recalled that on July 5, 2022, terrorists suspected to be members of the Boko Haram sect and the Islamic State for West Africa, ISWAP invaded the Kuje Correctional Centre during which they freed over 800 inmates including all the Boko Haram members detained in the centre.

“You can imagine what is happening today in Abuja, I will be frank with you, I went through the Department of State Services, DSS report, forty-four reports were given before the attack of Kuje, I want to say so.

“I want to confirm to you, forty-four reports, I went through all the reports, and it all has to do with this.

“There is no community that one attack or the other will happen and we will not have an intel, and this is part of the intel that they have given as what is going to happen, what is happening and what is not happening”, he explained.

The Deputy Speaker however advised that government should be supported to implement such moves in vulnerable communities where the ban on operations commercial motorcycle operators could check banditry, terrorism and other criminalities.

Meanwhile, the House at yesterday’s plenary stepped down a motion urging the Federal Government to halt the proposed nationwide ban on Commercial Motorcycles and ensure that adequate palliative measures are put in place before such decisions are implemented.

It would be recalled that the sponsor of the motion, Hon. Abubakar Makki Yallemen (APC, Jigawa) prayed that the Federal Government should restrict the proposed ban to the Local Government Areas where the mining activities or banditry/terrorist activities take place.

Leading debate on the general principles of the motion, Hon. Yalleman noted that the security and welfare of the people shall be the primary purpose of government as clearly provided in Section 14(2)(b) of the Constitution of the Federal Republic of Nigeria, 1999 (as amended).

He said the House is aware that the proposed ban of motorcycles is aimed at cutting the supply of logistics to the terrorists in the country but expressed concerns that the activities of bandits and kidnappings across the country have subjected members of victims’ families to serious psychological trauma even as they are forced to part with their hard-earned money.

He opined that while banning commercial motorcycle operations across the country as a means of curtailing security challenges, the welfare and wellbeing of the citizenry should be considered foremost, as the Federal Government has not offered palliatives measures to cushion the expected effects of the ban.

While worrying that the proposed ban would render millions of Nigerians jobless, Hon. Yalleman said that putting a sizable number of the population out of work will only aggravate the security challenges in the country.

Shortly after moving the motion, the Deputy Speaker, Hon. Idris Wase who presided over the plenary session urged him to step down the motion, as the parliament is obligated to support the federal government in their efforts to curb the worsening insecurity in the country.

“We should cooperate with the government, though we appreciate what our brother has brought and we appeal to the government that as they implement this policy, it should look at those areas that are not vulnerable and do not have the potency of having any such Insurgency in their community.

“In line with our principle to help to curb the incessant insecurity in our country we have to cooperate with government”, he stated.