Why FG should not ban mining activities in Nigeria – MAN 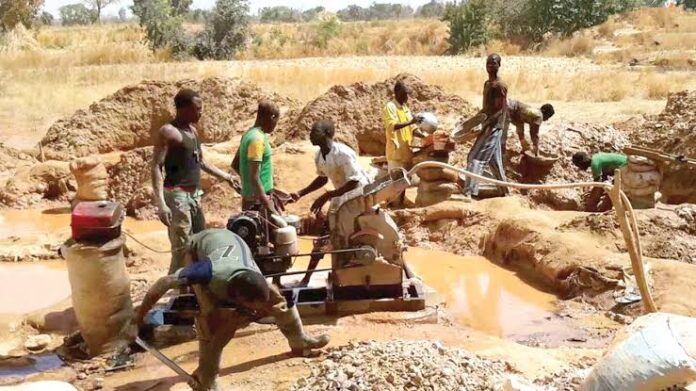 Miners Association of Nigeria, MAN, has called on the Federal Government to rescind its proposed ban of mining activities in the country, stating that it would negatively impact economic development and trigger illegal mining activities that could be backed by foreigners and local dissidents.

Decrying the proposed ban, the Association in a statement, signed by its Ag. National President, Alh Musa Muhammad and the Executive National Secretary, Dele Ayanleke said: “The nation was greeted late afternoon of Thursday, 21st July 2022 with the news of the proposed ban on mining activities in Nigeria as one of the resolutions of the National Security Council at its meeting of same day.”

The association said while awaiting further details from the appropriate quarters, “it is pertinent to air our view on this important national topic as a major player in the affected sector,” stating that “stigmatizing an important economic hub like the mining industry and criminalizing it as a scape-goat will be counterproductive.”

Giving reasons for decrying the proposed ban, the association, which commended the Federal Government for its efforts to tackle the country’s insecurity challenges, said “the challenges necessitate that the Government should evolve pragmatic policies and actions to ensure the fulfillment of its primary obligation to secure lives and properties.”

The statement, which was also signed by Tope Adebanjo, National Publicity Secretary of the association, recalled that at the inception of the administration of President Muhammadu Buhari, an agenda to diversify the economy away from Oil and Gas, and broaden the economic space, using Mining and Agriculture as pivots was included in the economic blueprint.

The association expressed dismay that “while the Government keeps faith with the Agric Sector with more attention and interventions, the Solid Minerals Sector remains starved of similar gestures; as the vendors of the few interventions jettisoned the social concern of the Government by slamming administrative bottlenecks and unattainable conditions on the intended targets who are predominantly artisanal and small-scale miners.”

“In spite of this, the sector’s contribution to Government revenue was gradually improving and wealth is being created through job creation and value-chain development, made possible by resilience and private initiatives for survival.”

“Therefore, placing a blanket ban on mining activities will not only negate the Government agenda in the face of dwindling oil revenue, but it will further explode the labor market; thereby enlarging the reserves for the recruitment of more bandits and criminals.”

The association argued that although government banned mining activities in Zamfara and Katsina states in the past three years. The association however wondered if the ban was effective, saying that questions begging to be answered include: Who are actually banned?; How effective is the ban?; What are the implications of the ban?

The association expressed concern that “the victims of the purported ban are the identifiable and traceable owners of the mines with extant mining titles obtained from the appropriate authorities and remitting appropriate payments of annual service and royalties to Government purse.”

While saying that the regulatory and security agencies lack both human and logistics capacities to enforce the ban, the association opined that the ban is only succeeding in keeping the legitimate mines owners away from their concessions and declaring the field free for illegal operators to occupy the country’s rich fields of solid minerals, adding that a ban on mining will pave way for sponsorship by foreign nationals and local chiefs.

“Even with the procurement of surveillance vehicles, how many of such vehicles can be deployed to a mining location at a time; and how many administrative and security personnel can each of the vehicles contain to be able to confront the bandits who are fully armed with indepth knowledge of the terrain and capacity to lay ambush for any team of law enforcers. This is what happened recently at a mining location in Shiroro Local Government Area of Niger State.

“In effect, the purported ban of the gold rich mining fields of Zamfara has been the revenue source fueling the increasing waves of insecurity in the North West,” the association said.

According to the association, if government bans mining activities, “the ugly consequences are loss of revenue to Government coffers from legitimate operators, more revenue to the bandits and their sponsors to procure more arms and ammunition to disturb the society, and of course, creation of more hands to be recruited into the armed banditry forces.”

The association explained that the proposed ban, if executed, cannot provide the solution to the national security challenges.

“It is on this note, that as partners in the Nigeria project and the body of major industry players, we feel obliged to offer some patriotic tips toward finding solutions to the daunting issue of national security and, especially around the mining corridors:

“We encourage our security agencies to up their trade in intelligence policing.

“There are unconfirmed reports from our members in the affected areas, noticing high level movements into the purported banned minefields, including air movements that are not for surveillance mission.

“It is advised that security searchlights be beamed on some high profile personnel in the society.

“The reported dethronement and prosecution of some high ranking traditional rulers in recent time should serve as enough pointer to this piece of advice.

The association vehemently opposed the policy permitting 100% ownership of mining assets by foreign nationals, saying that it should be urgently reviewed.

According to the association, experience has shown that foreigners are the major targets of the kidnappers and their presence in mining locations is a major incentive to the increasing rate of kidnappings and killings around mining sites; as these criminals are always ready to waste as many lives as can be identified as obstacles to their targets. The Shiroro massacre also comes handy to illustrate this point.

The association further expressed concern that “the rate at which Chinese Nationals flood our country’s minefields calls for concern, stating that ‘the issue of Chinese and Lithium is an issue for another day which we intend to take up with the Government through the Ministry of Mines and Steel Development.”

“Without prejudice to the rights and privileges of any Nationals under various bilateral and multilateral treaties and charters, to which Nigeria is a signatory, we recommend that the movements of foreign nationals be restricted to urban centers,” stating that the current security challenge necessitates that such a measure should be adopted.

According to the association, “militancy, kidnappings, killings, illegal bunkering, unorthodox refinery and all forms of criminalities have been the hallmark of the Oil and Gas sector for ages. Yet, not for once did we hear the Government making any attempt at banning drilling activities.”

“We hereby call on the Government and all security agencies to deploy the same security measures being employed in the Oil and Gas sector to the Solid Minerals Sector and save the entire mining industry and its operators from incessant stigmatization and embarrassment.

“We reiterate our stand that any policy to further ban mining activities in Nigeria will be counterproductive and capable of further worsening the already worse security situation in the country.”

“Our submission is not a prophecy of doom, it is borne out of our patriotic obligation to our dear country as responsible individual and corporate citizens of the Federal Republic of Nigeria,” the statement added.