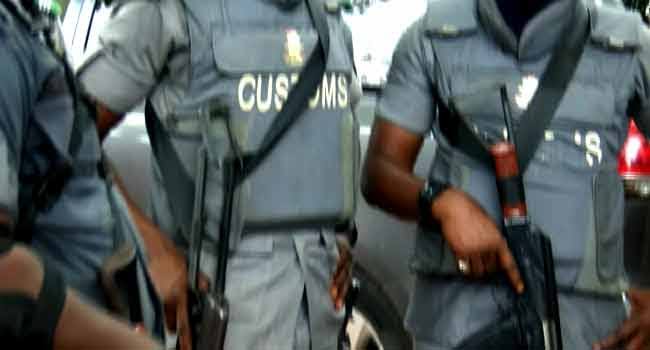 THE Comptroller General of Customs Strike Force, Zone ‘A’ on Wednesday said it intercepted contraband goods worth N7.4billion with four suspects arrested in the first six months of 2022.

Coordinator of the Strike Force team Muhammed Sani Yusuf, who disclosed this at a media briefing in Lagos, said the team within the review period also recovered N3.1billion through issuance of demand notices on imported goods following discoveries of short payment of duties by importers.

He said the feat was achieved through enhanced 24hour, round the clock patrol and provision of new additional patrol vehicles. Coordinator, Customs Strike Force Team, Deputy Comptroller Yusuf Sani Muhammed while showcasing some of the items seized by the team.

In the first six months of this year, the Strike force posted more than N7.4 billion worth of seizures that contravened government extant laws.

Three billion, one hundred and forty million, seven hundred and fifty eight thousand naira that would have been lost to importers through inaccurate payment of duties by importers was recovered.

This recovery, he said was through the meticulous checks on import documents and subsequent issuance of Demand Notices, sequel to discoveries of short payment of duties.

Yusuf disclosed that most of the seizures include 8000 bags of foreign parboiled rice of 50kg each, equivalent of 13 trucks, a forty feet container of Tramadol, sildenafil citrate, 1613 bottles of 100ml codeine and 2079 bales of second hand clothing.

Four suspects in connection with some of the seizures are in the custody of the government agency.

The Coordinator said their operational capacity received a big boost following the additional new Toyota Hilux vehicles from the Comptroller General of Customs, which he noted provided support for suppressing smuggling, prevent revenue loss, while preventing environmental degradation, unlawful wildlife poaching, resulting in the protection of the National economy.

According to him,” importing what we can produce threatens our economy; unlawful felling of trees degrades the environment and promotes deforestation while illegal killing of wildlife creatures and endangered species like pangolin and donkeys for their scales and skins respectively, could lead to the extinction of these animals”.

Yusuf deposed that the Unit shall be resolute and unrelenting to arrest perpetrators, seize prohibited items from them or their accomplices, and promote lawful trade using the legal instrument of the extant Customs and Excise Management Act (CEMA) CAP 45 LFN.

He said the officers’ efforts for the second half of the year is already invigorated “and we shall ensure that smugglers and enemies of our economy have no hiding place within our area of responsibility “.

He advised importers, agents, haulage operators and the entire business community operating in the South west to keep themselves abreast with the import and export prohibition lists and guidelines, as ignorance of the law is not an excuse.