HomePoliticsRivers: Court to hear PDP suits against INEC, Accord, SDP, others, August...
Politics

Rivers: Court to hear PDP suits against INEC, Accord, SDP, others, August 31 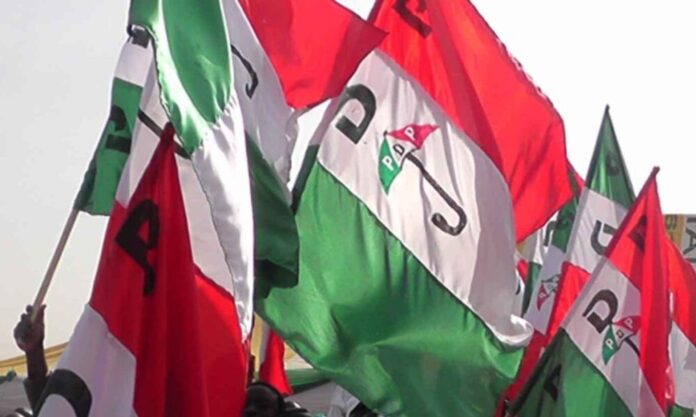 Federal High Court sitting in Port Harcourt, capital of Rivers State, has adjourned till August 31, 2022, to hear the separate suits by the Peoples Democratic Party (PDP) against the Independent National Electoral Commission (INEC), Accord, Social Democratic Party (SDP), Labour Party and some of their national assembly candidates over the parties primaries.

The presiding Judge, Justice Dalyop Pam, declared the adjournment date on Friday, after the parties in the matters made their submissions on their filed applications and counter affidavits in court.

Justice Pam also declared a definite hearing on the matter in the next adjourned date.

The PDP filed the suits against the three political parties including the INEC, and the parties candidates challenging the credibility of their primaries.

Speaking with newsmen outside the courtroom, counsel for Accord, Abdulameed Mohammed, a Senior Advocate of Nigeria, explained that his client was served with the processes, adding that the plaintiff filed the action out of time.

According to Mohammed “They don’t have any standing in court because a political party cannot challenge other political party primaries guided by different constitution. Subsequently we filed a motion to strike out the name of Accord because they were sued as Accord Party. That party does not exist in Nigeria, so we are saying that the party should be struck out from the suit”.

On his part, counsel for SDP, Femi Falana (SAN), said that “PDP sue the INEC, the Social Democratic Party and 15 members of the SDP. The sole purpose of the case, is an attempt by the PDP to be the sole contestant in all elections in Rivers State in 2023.

“The PDP is challenging the results of the primaries conducted by the SDP and I think the PDP is doing that to all the other political parties in Rivers State, with a view not to have an election in this state for any positions”.

Falana explained that “We have not filed our objections yet, what was taken this morning by the court is our application to enter appearance with a view to defending the case and we are going to join issues with the PDP very seriously”.

Also, Uche Olawunna, counsel for Labour Party, said “We are in court for the matter filed against virtually all the political parties in Rivers by the Peoples Democratic Party. For own sake the complaint basically was that we didn’t conduct valid primaries with regards to our candidates in Port Harcourt city federal constituencies 1 and 2 and Obio/Akpor federal federal Constituency.

“The matter came up for the first time this morning, we informed the court that our own time was still running and the court in its wisdom adjourned the matter till August 31 for definite hearing”

“We opposed it. We know them as Accord Party and all the papers from INEC bears Accord Party as their name. So, we are opposing them and have filed application.

“The one for Social Democratic Party, Femi Falana SAN entered appearance for the defendants and us still within the same time haven just been served with the originating processes awhile, he still have about two days and he asked for an adjournment to enable him formally file his processes.

“The one for Labour Party, they still have about two days. So it was also adjourned to August 31, to enable them file all their papers. The matters are now for hearing”, Udenna added.

Meanwhile, though not a party in the suit but in solidarity with his party in the court, Chief Dumu Lulu-Briggs, Governorship Candidate of Accord in Rivers, expressed that Rivers people should be allowed to choose their political leaders and not to impose candidate on them.

Lulu-Briggs stressed “In the first place, the action so far is not against me. Is against my party and candidates for the national assembly elections, but this is unwanted distraction and I think is a deliberate attack by the PDP to meddle in other people’s affairs, cause disruption while they go round the Local Government Areas campaigning in the name of PVC drive.

“For us, this level of hysteria that the party is showing is baffling. There is no point being afraid of the contest and they can’t run away from from the contest because the contest they must have. If you have credible candidates then put them let the people decide. You can’t say you are in the PDP, then you want to meddle in the internal affairs of other parties, If you have a candidate, put him there let the electorates decide and you can’t take away the rights of the people to decide who they want and you can’t appoint a governor for Rivers people. Rivers people are tired of underhand tactics. We want free, fair, credible elections”