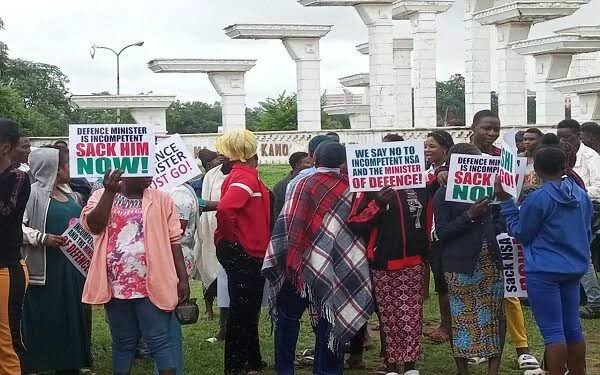 *Accuse the duo of abdicating their duties despite rising security challenges

*Say Nigerians are not just tired, they are suffocated, frustrated, threatened

Amidst rising security challenges across the country, especially the Federal Capital Territory, scores of aggrieved persons under the aegis of the Guardians of Democracy and Development Initiative (GDDI) have added voice to call on President Muhammadu Buhari to sack the National Security Adviser (NSA), Maj. Gen. Babagana Monguno (Rtd) and the Defence Minister, Maj. Gen. Bashir Salihi Magashi (Rtd) immediately for allegedly abdicating in their duties.

The protesters who commenced the march from the Abuja Unity fountain brandished several placards and banners with inscriptions like: “Defence Minister is incompetent, sack him now”, “Magashi must go”, “We say no to incompetent NSA and Defence Minister” to register their anger over the worsening security situation in the country.

Comrade Danesi Momoh who spoke on their behalf threatened to join those calling for the resignation or impeachment of President Buhari if he fails to heed to their call to sack Monguno and Magashi.

Flanked by Co-convener of the group, Mr Igwe Ide-Umanta, he explained their grievances with Monguno and Magashi thus : “We wish to start with the statement credited to the National Security Adviser himself, Maj. Gen. Babagana Monguno (Rtd), where he was quoted as saying: “people are getting tired and are beginning to gravitate into other means of self-help.”

“The truth is that Nigerians are not just getting tired; we are suffocated, frustrated, threatened, apprehensive and completely uncertain about our safety and that of our loved ones.

“We cannot continue this way, and both the National Security Adviser (NSA) and the Minister of Defence Know that.

“We have had to tolerate a National Security Adviser who has no record of achievement in his seven (7) years in office. And right under his supervision, intelligence has been ignored (as has now been exposed by the Deputy Speaker of the House of Representatives).

“There is no proactivity and no evidence of any practical input from him in addressing National Security before its total collapse status.

“On the part of the Minister of Defence, he has no innovation, inspiration and the right professional touch to lead such an important Ministry at a critical time like this. In fact, he appears too frail, tired and out of touch with contemporary security realities and defence strategies. Thus he has no business being there. Mr. President should show mercy to the citizens and deploy a better hand and brain.

“Back to the National Security Adviser, Maj. Gen. Babagana Monguno (Rtd), we must also note that his statement as quoted above suggests that he too is tired, frustrated and has no idea of what to do.

“He has never done anything before and cannot be expected to do anything other than the same seven (7) years old recycled rhetoric. Things can only worsen under such abysmally poor NSA”, he added.

Recall the damning revelation of the Deputy Speaker of the House of Representatives, Rt. Hon. Ahmed Idris Wase, (which was previously referred to) that 44 Security Reports were forwarded from the Department of State Security (DSS) and other Intelligence Agencies, alerting Mr. President of an impending attack on the Kuje Custodial Centre.

“That statement remains unchallenged till date. And the question is: “who coordinates the intelligences from the Security Agencies? And who processes them and see to their implementation?