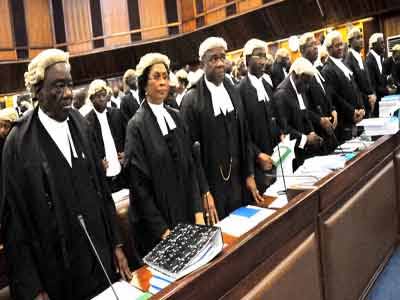 The ceremony was declared opened by the Acting Chief Justice of Nigeria, Justice Olukayode Ariwoola who was represented by Justice Nwani Aba Aji. The theme for this year’s conference is Undermining Judicial Authority in Democracy – Causes, Consequences and Solutions. In her address Justice Aji highlighted inter alia various ways whereby the judiciary has been undermined such as blatant refusal to order, poor renumeration for judicial officials. She stated that SPIDEL is the panacea for undermining of judicial officials. She concluded that undermining one arm of government the Judiciary will spell doom for the country. Justice Aji commended the NBA President, Olumide Akpata and the Chairman of SPIDEL Dr. Monday Ubani and  declared the conference opened.

In his keynote address Justice Inyang Okolo said the Judiciary has been looked upon as the last hope of the common man. He said tracing the history of the Courts means referring to United Kingdom’s common law which comprises local customs. He noted that before the advent of the common law there existed indigenous culture and their traditional rulers. He said because dispute is inevitable traditional rulers issue orders and any disobedience will be melted by punishment.

He noted that Section 61 of the 1999 Constitution vested power on the Judiary to issue orders and injunction and it must be obeyed. Citing the case of Olaore V. Oke he noted that an order issue directs a party to do a particular thing at a specific time and failure will amount to contempt of court.

He stated that a prisoner cannot think that a judgment is a nullity and walk out of the court. He noted that a judgment of court will remain valid unless set aside by a Court of Appeal. Quoting the judgment delivered in Labour Party V. INEC he said a court order must be obeyed even if perverted. He noted that where Government or citizens fail to believe in court orders the citizenry may result to self help.

Justice Okolo enumerated the consequences of disobedience to court orders as contempt of court. Quoting the case of Alake V. Federal Government of Nigeria, he referred to Justice Oputa JSC statement that if an order of court is disobeyed it amounts to contempt of court by imprisonment or fine. Furthermore he stated that disobedience to court orders results in lack of confidence in court and this will erode the conference of the citizenry. He disclosed further that where foreign companies lose confidence in the Judiciary there will be no foreign investment. He stated that opposition to judicial independence and delays in hearing and determination of cases result in lack of confidence by citizenry.

He proffered solutions that disobedience to court should be made a criminal offence. He said also that court order should be restructured and the court should have trained Court Marshall who will enforce court orders.He disclosed that the Judiciary should be financially independent and fully funded by all aspects of Government. Furthermore , he noted that there should be public awareness of respect for the rule of law by NBA and all Judicial organizations.He stated that the Rules of Court should be reviewed regularly and Judges should fashion out means of quick dispensation of justice.