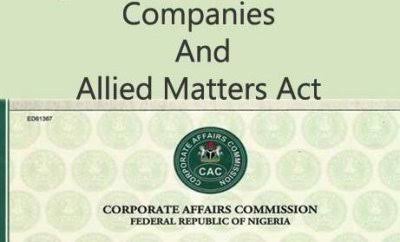 The Nigerian Banking sector is highly regulated by several laws which seek to regulate banks and banking businesses. One of the effects of these laws is that it affects the relationship of banks with their customers, hence creating some peculiar legal relationship between banks and their customers.

One of the legal duties that a bank is bound to respect is its obligation to keep a customer’s account and affairs secret and confidential. This was the decision of the Court of Appeal in the case of UBA VS. BAKARE WASIU (2017) 4 NWLR PT. 1555 318 C.A where the court held that “The bank in possession of a customer’s money can be seen as a trustee and therefore owes its customer a duty of secrecy in relation to that customers account details and related matters”.

However, Section 842 of the Companies and Allied Matters Act 2020 provides that banks “shall” inform the Corporate Affairs Commission about any Incorporated Trustees account operated with them which has entered dormancy and that the Commission has the power to dissolve such association and direct the bank to transfer the amount standing to the credit of the relevant association to such other associations as may be specified by the Commission where a satisfactory report is not given to them after 15 days upon request of such report from the concerned Incorporated Trustee. For this purpose, an account is dormant if no transaction other than a transaction consisting of payment into the account or a transaction initiated by the bank for a period of five years immediately preceding the date a report is made to CAC concerning the account.
Following the above, can it be said that this particular section of the Act is in contravention with the duty of privacy and confidentiality which a bank owes its customer? It can.

All banks in Nigeria are regulated by the Central bank of Nigeria, as stipulated by the Banking and Other Financial Institutions Act (BOFIA) 2020, but the blanket power given to the CAC by this provision of S. 842 of CAMA empowers the Commission to interfere with the finances and financial structures of an organization.

Section 72 of the Banking and Other Financial Institutions Act (BOFIA) 2020 provides the procedure banks should follow in the case of unclaimed funds or abandoned property. These procedures mandate banks to transfer such an account to “the register of dormant accounts and where such an account has been on the register for ten years, the bank shall advertise in at least two daily newspapers with national circulation, giving notice that the account has been transferred to the register of dormant accounts.” The provision of Section 72 further states that –
Where an account has been in the register of dormant accounts for 10 years, the bank, specialised bank or other financial institution shall after the advertisement under subsection (5) of this section, transfer the balance on the account including the interest earned to an account earmarked for that purpose at the Bank.
It is the argument of the lawmakers and the Corporate Affairs Commission that non-governmental organizations and other associations that fall under Part F cannot be left to operate on their own without regulations, but this is a misleading premise as NGOs and associations registered under Part F of CAMA in Nigeria are already heavily regulated by laws – both civil and criminal – and guidelines which regulates their human and corporate practices.
It is also worthy of note that this provision of Section 842 of CAMA touches on, and infringes upon an association’s constitutionally guaranteed right to own property.

Emiola is of the Faculty of Law, Bayero University, Kano