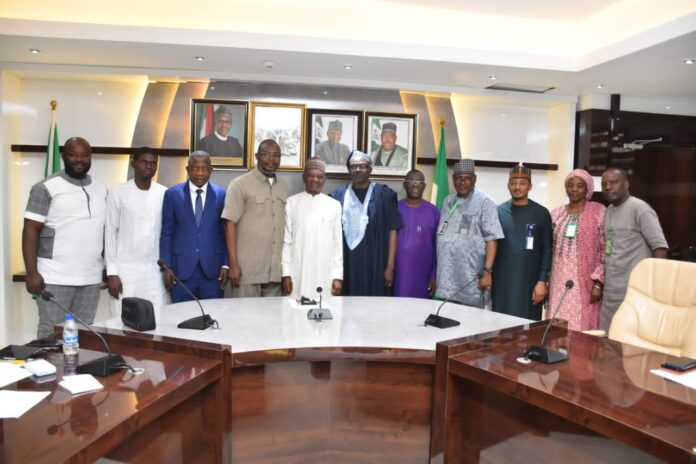 Minister of Agriculture and Rural Development, FMRAD, Dr. Mohammad Mahmood Abubakar has reiterated the Ministry’s commitment to collaborate with stakeholders in the Cashew Value chain towards enhancing the quality seedlings, increase production and income generation.

Mahmood stated this during a courtesy visit by African Cashew Alliance, ACA, led by its President, Otunba Babatola Faseru, in his office, in Abuja.

He revealed that “the focus of the present administration is the growth of the agricultural sector and once that is achieved we have set a base for economic growth”.

The Minister noted that “every single value chain in the agricultural sector is important and if they come together, they would make a big difference, in the area of the Food and Nutrition Security”.

Speaking further, the Minister said that the Ministry would continue to support Cashew Value Chain, pointing out that, the Ministry had trained smallholders farmers on Cashew Production, Processing and Packaging of the Product.

He added that cashew had become a national commodity that grows across the 36 State of the Federation, maintaining that cocoa was second in terms of foreign exchange earnings to the economy.

The Agric Minister commended the Association for their efforts towards planning of the 1st ACA conference in Abuja, adding that it would improve the value chain and attract investors.

Abubakar also assured the association that “the Ministry will be involved to make the forthcoming event a great success”.

Earlier, the President of African Cashew Alliance, Otunba Babatola Faseru stated that ACA was a non-governmental organization created in 2005 with the mandate of promoting a global competitive African Cashew industry that would benefit the entire value chain from farmers to consumers.

He added that Africa was losing over 2000 jobs while noting that Cashew could provide over 1000 jobs in Nigeria.

In his words, “Jigawa and Kebbi States are doing well in Cashew production”, Otunba Faseru added.

He, therefore, solicited for the support of the Ministry to move the Cashew sub-sector forward.

In his remarks, the President Cashew Association of Nigeria, Hon. Ojo Ajanaku thanked the Minister for his support, noting that Nigeria had about 600, 000 surviving cashew trees spread across the country.

He maintained that currently 75% to 80% of cashew nuts produced in Nigeria were exported, as only very few companies are involved in the local processing of the produce.

The President, therefore revealed that, cashew can grow in any part of the country adding that 60% of the world cashew growth was from Africa.

Tambuwal named interim chair of NGF as Fayemi bows out