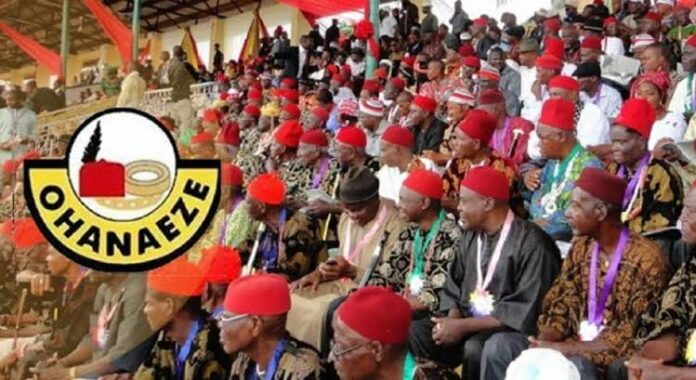 Ambassador George Obiozor led
Ohaneze Ndigbo has claimed the insecurity in the South East zone was borne out of exclusion of someone from the zone among the nation’s security chiefs by the All Progressives Congress,APC-controlled federal government of President Muhammadu Buhari.

The group also stated that contrary to allegation by the Presidential spokesman, Garba Shehu that “non-indegenes and security officials are being killed by terrorists in South East”, urged the communities and religious leaders in the zone to speak up as the people of South East view taking of human life as abomination.

In the press statement signed by the national publicity secretary of group, Dr. Chigozie Alex Ogbonnia and made available to journalists in Awka, Anambra state, yesterday noted that series of attacks, abductions and killings in the Northern part of the country including the one in President Buhari’s home town, Daura, Katsina state which Shehu referenced as evidence that insecurity pervading the country was not selective, but, a national challenge.

” And, suddenly turned round to insinuate that “non-indegenes and security officials are being killed by terrorists in South East zone”, and tasked the leaders in the area to stop it.

“As at now, all schools in the Federal Capital Territory have been closed down on account of insecurity and no person contemplates a reopening.

“Paradoxically, when the district head of Daura, the hometown of Mr President, was kidnapped and was freed after two months, Mallam Garba Shehu was quoted as saying that the “incident was evidence that Duara was not receiving preferential treatment and that insecurity was a national problem.

“In other words, when insecurity manifests in the North West, it is a national problem; but when on the other hand, it occurs in the South East, it is blamed on the inability of the “community and religious leaders to speak more forcefully against the killings and to stand up and defend the ethos of the nation’s cultural and religious heritage.

“I can state without any fear of contradiction that the Igbo possess the greatest wanderlust as well as the most hospitable dispositions amongst the various ethnics in the world. The non-indigenes in the South East enjoy untrammeled friendliness, inter-ethnic assimilation and conducive business environment; what happened to the non-indigenes in the South East is most regrettable as part of the current national calamity”, Ogbonnia stated.

Ogbonnia rather insisted that non-inclusion of an Igbo among the service chief accounted largely for the insecurity in the zone arguing, “How do we fight insecurity by appointment of service chiefs based on ethnocentric and religious considerations as against the best global practices of military competence?

“Put differently, how can the South East be excluded among the over 16 service chiefs in the Nigerian armed and paramilitary forces and expect insecurity not to fester? “.

Ogbonnia said “it is very uncharitable, if not mischievous, to poison undiscerning minds by insinuating that non indigenes and security officials are killed by the terrorists in the South East.

“On the other hand, to appropriate national problem to the South East of Nigeria is an ethnic prejudice taken too far. Invariably, banditry in the North Central persists because their leaders have not forcefully spoken or rather they are publicly celebrated and turbaned or still, offered the Sheik Gumi option”, he maintained.