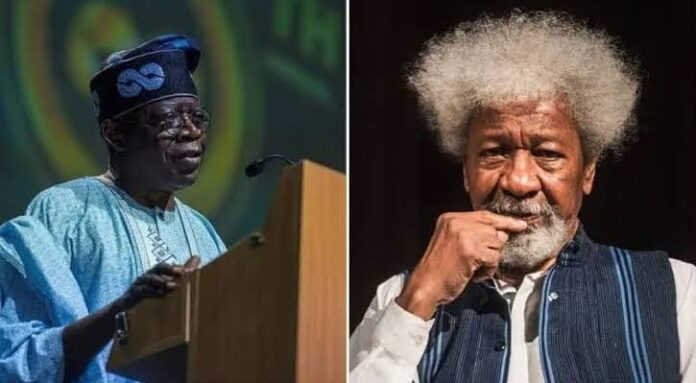 One of the seven founders of the National Association of Seadogs, NAS, also known as Pyrates Confraternity, Nobel Laurette, Prof Wole Soyinka has distanced himself from a video of members of the confraternity where they mocked Bola Tinubu, saying it was in bad taste.

This is coming as the presidential candidate of the Labour Party, Peter Obi denied being a member of the Pyrates Confraternity.

In a video of the procession of members of the NAS that went viral on Sunday they sang songs that were apparently directed at the APC presidential candidate.

Reacting to the video, Prof Soyinka said he was not a part of the performance and he is not in anyway connected to the feelings the remarks were intended to convey.

According to him, while members have the freedom to express themselves, it is necessary for him to comment on the video because he is “connected” with the group.

“The display acidly targets a presidential candidate in the awaited 2023 elections. Since the whole world knows of my connection with that fraternity, it is essential that I state in clear, unambiguous terms, that I am not involved in that public performance, nor in any way associated with the sentiments expressed in the songs,” he said.

“Like any other civic group, the Pyrates Confraternity is entitled to its freedom of expression, individually or collectively. So also is Wole Soyinka in his own person. I do not interfere in, nor do I attempt dictate the partisan political choices of the Confraternity. I remain unaware that the association ever engages in a collective statement of sponsorship or repudiation of any candidate This is clearly a new and bizarre development, fraught with unpredictable consequences.

“In addition, let me make the following cultural affirmation. I have listened to the lyrics of the chant intently and I am frankly appalled. I find it distasteful. I belong to a culture where we do not mock physical afflictions or disabilities. Very much the contrary.

“The Yoruba religion indeed designate a deity, Obatala, as the divine protector of the afflicted, no matter the nature of such affliction. This sensibility is engrained in us from childhood and remains with us all our lives. It operates on the principle of mortal frailty to which all humanity remains vulnerable.”

The Nobel laureate further stated that a follow up statement will be issued when “I have made further enquiries into this strange, uncharacteristic outing of the association”.

In his own reaction, Peter Obi, the presidential candidate of the Labour Party (LP), he declared that is not a member of the National Association of Seadogs (NAS), better known as the Pyrates Confraternity, his media aide Valentine Obienyem has said.

Obienyem made the clarification on Monday while responding to claims that Obi is a member of the group founded by Nobel Laurette, Prof Wole Soyinka by one Fejiro Oliver in a now deleted post.

“Not at all,” Obienyem said in response to a question from an online publication on the deleted Facebook post.