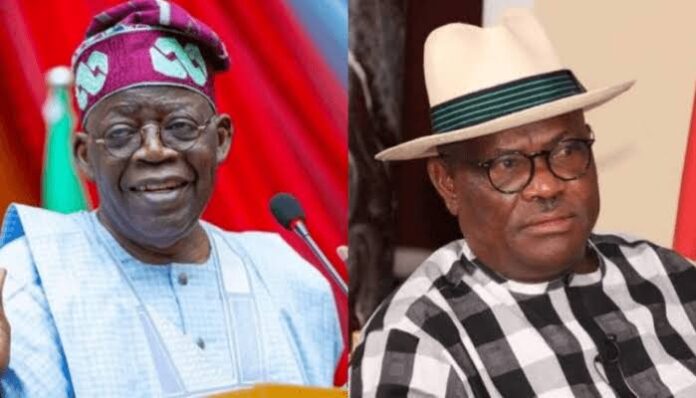 …Says he cannot demolist their hotels

Rivers State chapter of the All Progressives Congress, APC, has declared that

Governor Nyesom Wike is in a panic mood following the refusal of Asiwaju Bola Ahmed Tinubu to forge an alliance with him.

They said the governor’s threat to demolish hotels used by his political adversaries for meetings is in reaction to his bid to secure protection from prosecution at the end of his tenure in May 2023.

While challenging him and his threat to demolish hotels patronized by his political enemies, the APC spokesman in the state, Chris Finebone said: “The APC is not surprised because it is a notorious fact already known to many politicians and observers that Gov. Wike was thrown into his present panic mode ever since he failed in his desperate attempt to secure the Presidential and later Vice Presidential tickets of his party in order to cover up financial and other atrocities he committed over the past 10 years as Minister of Education and presently governor of Rivers State for two terms ending May 29, 2023.

“Lately, his predicament has not been helped by the inconclusive outcome of his offer to work for the Presidential Candidate of the APC, Asiwaju Ahmed Tinubu, in exchange for a safe landing and protection after the 2023 general election having been convinced that Tinubu will defeat Atiku Abubakar of his party, the PDP.

“As Wike presses on with courting the APC to secure protection after the 2023 general elections, a close ally of the APC Presidential Candidate, Gov Sanwo-Olu of Lagos and other APC stalwarts will be in Rivers State this week to either commission projects undertaken by Gov. Wike or flag off others.

“However, it did not take long for any discerning mind to know that the 19-paragraph broadcast by Gov. Wike is only a knee jerk reaction by the governor to fight back his fear for his own shadow. This is not the first time the governor has resorted to crude and primitive methods to intimidate and subdue his political opponents if his threat to demolish hotels and leisure places where politicians hold their meetings is anything to go by, having done so during the Covid-19 pandemic.

“Besides the claim of Wike being in a panic over the refusal of Tinubu to work with him, and hence the threat against the hotels, the APC Rivers party spokesman said:

“The APC is not surprised at the threat by Gov. Wike. His house (PDP) is crumbling fast right in his face. For obvious reasons, his main men of yesterday have turned political foes today.

“His entourage has seen faces change over and over again of late. We know his threat is essentially directed at his henchmen who have taken their destinies in their own hands and rebelling against the local potentate. Across the State these men have pitched their tent with Wike’s tormentor-in-chief, Alhaji Atiku Abubakar.

“The APC in Rivers State has news for Gov. Wike. He is not in any position to demolish the hotel, leisure places or any property of any APC member in Rivers State under any guise whatsoever.

“This message should sink in adequately. It is absolutely the choice of his party members to let him repeat his jungle justice on them as the world witnessed during the last pandemic high noon.

“The anarchy Wike will bring upon himself should he attempt it against any APC member will assume the dimension of an apocalypse of immense proportions. We hope the governor takes this warning seriously.

“We want the governor to realize that his time is fast winding up. He should accept this fact and not exacerbate his fate as power and immunity depart from him in a matter of months.”