HomeMetro NewsInsecurity: "Commandants to be held responsible for any attacks in their domain"...
Metro News 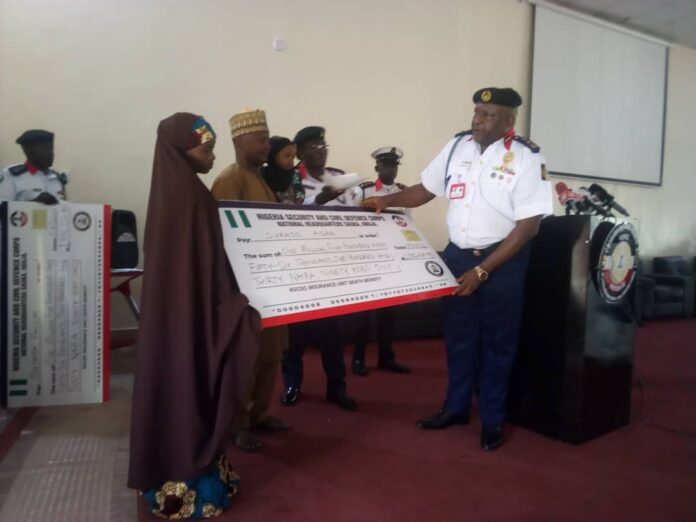 In its continued efforts to fight insecurity, the Nigeria Security and Civil Defence Corps, NSCDC, has held a strategic meeting to curb the menace, that was ravaging/ bedeviling the country.

Speaking during the event held today at its Headquarters, in Abuja, the Commandant General of NSCDC, Dr Ahmed Abubakar Audi stated that all hands must be on deck to fight any form of insecurity while charging the Zonal Commandants and State Commandants, to put in stringent measures to assure safety of lives and properties especially Government owned facilities across the country.

Audi noted that the emergency meeting was called to task the Zonal Commanders and State Commandants to brace up as it was the duty of NSCDC to protect national assests therefore they have been regiged to carry out their duties.

He said, “those of you working in the South – South region, it is your duty to reduce oil theft and protect facilities within that region. You have observed over time that the main stay of Nigeria’s economy though Federal Government is diversifying the economy through Agriculture and other industries such as Mines and Steel/ Solid Minerals.”

He therefore stated that henceforth every Commandant would be held responsible if there were any attacks on national facilities within their domain.

“You will answer for it, this one of the greatest tasks before you and you must ensure it is carried out accordingly. You must not sleep, you must not rest, you must deploy all personnel to all places, infrastructure sites that requires adequate security attention, to all the sites such as airports, railways and also to our Correctional facilities,” he added.

He also said that “one of the strategies adopted by these hoodlums was to cause or unleash very serious mayhem to distrupt and distablize, hence they attack the city and correctional centers. Of course they have their members jailed in there so they would do anything criminal to release them.”

Hence the Minister of Interior Ogbeni Rauf Aregbesola has given directives to the NSCDC to support and beef up security in all correctional facilities in the country.

“Therefore any Commandant who has not deployed, visited or ensured adequate security at all the Correctional facilities in his domain would be sanctioned.

“Again any States that have pipelines, as we know we have hardened criminals in the country who are even digging out the pipes to go and sell, so it is our duty to protect such assests and facilities and those pipelines to make sure that they are safe,” he continued.

He further called on the Zonal Commanders and State Commandants to coordinate their personnel to win this fight against insecurity while saying that the Zonal and State offices were there to provide administrative guidelines to achieve the its purpose as the Nigerians were hoping for adequate security to be provided to ensure their safety and find a lasting solution to this menance.

He also charged the media to carry out their duties of disseminating information to the public accordingly and appropriately.

Meanwhile the Nigeria Security and Civil Defence Corps has disbursed the over Nineteen Million Naira, to eighteen next of kin of its fallen heroes as part of payment of their insurance benefits.

The NSCDC disclosed that in July 2022, it has also disbursed above Two Hundred Million Naira which was the backlog insurance benefits to over sixty beneficiaries.