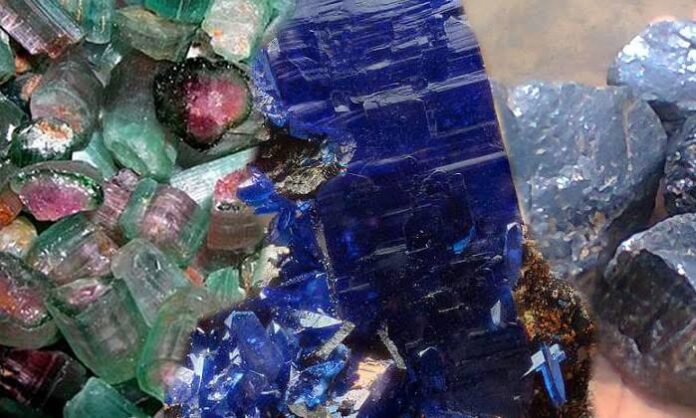 Ministry of Mines and Steel Development in collaboration with the Legal Unit of Department of State Services in Cross River State, on Tuesday, prosecuted and convicted two persons for illegal possession of ‘Gemstones’ minerals.

A statement by Tony Ekpo, for Director of Press, in the ministry of mines, said the convention action will serve as a deterrent to others who may wish to go that route in the future.

Ekpo noted that Emeka Ezema and Ye Kachi, were arrested on the 5th July, 2022, in Cross River State, which were found in possession of 300g of Tourmaline, without authorization or license from the Ministry as stipulated in sections 2, 93, 94 of the Nigerian Minerals and Mining, Act, NMMA, 2007 and Regulation 133 of the Nigerian Minerals and Mining Regulation, NMMR, 2011.

The statement read: “The Ministry of Mines and Steel Development in collaboration with the Legal Unit of the Department of State Services, Cross River State arraigned the two suspects in court on Wednesday, 13th July 2022, charged with conspiracy to commit felony to wit: possession of Tourmaline without license under section 516 of the Criminal Code.

“Unlawful possession of Tourmaline, contrary to section 93 and punishable under section 146(2) of the NMMA 2007. The two had pleaded guilty to the offences charged against them and were convicted accordingly. Subsequently, The Court on Tuesday 26th July, 2022 also granted Engr. Mayowa Omosebi, Federal Mines Officer (FMO), Cross River State to take possession of the forfeited 300g of Tourmaline according to section 146(2) of the NMMA 2007.

“Mr. Mayowa Omosebi, has confirmed that he is in possessions of the forfeited 300g of Tourmaline, and also suggested that the stones be disposed of at the current market value as stipulated in the Ministry’s reviewed rates for minerals which came into effect on the 1st of May, 2022, and that the minerals be auctioned only to person who have valid license to purchase and possess minerals.

“The Ministry of Mines and Steel Development, while commending the Federal Mines Officer (FMO), Engr. Mayowa Omosebi and the Department of State Service for acting swiftly in the arrest and the conviction of the suspects.

“This is also a good one for the Ministry and would serve to show that the Ministry actually has the power to convict criminals in the Solid Minerals Sector’’.