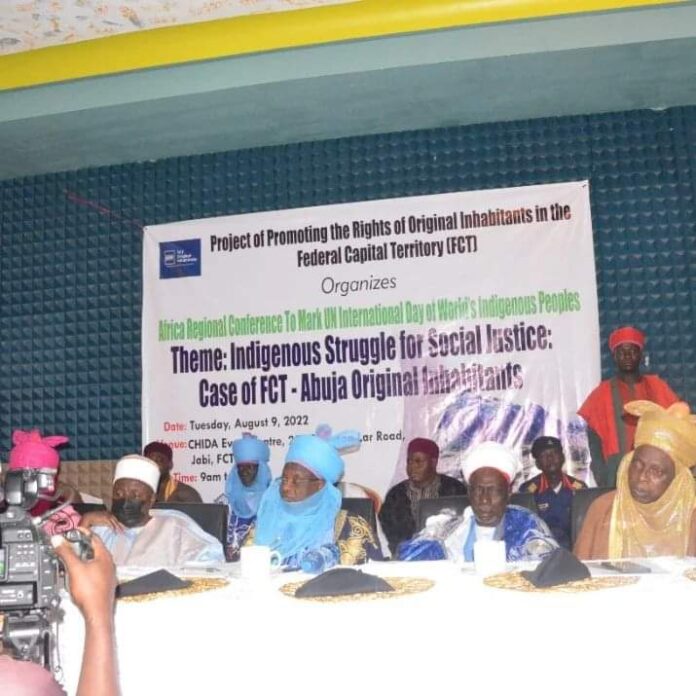 Stakeholders have called for concerted efforts to address the plights of Original Inhabitants of Abuja.

The call was made in Abuja during an event to mark this year’s United Nations International Day of the Indigenous People.

Since Abuja was designated as Nigeria’s federal capital city in 1974, the original inhabitants have suffered political, economic neglect. The culture of the Original Inhabitants is also on the brink of extinction.

Speaking during a National Stakeholders Dialogue on Rights of Original Inhabitants in the FCT, Executive Director, Centre for Transparency Advocacy, CTA, Faith Nwadisihi, called for concerted effort to advance the plights of FCT original inhabitants to the Federal Government.

She explained that it would be an injustice to the original inhabitants if other stakeholders don’t get involved in the quest to ensure that government addresses the issues affecting them.

She said: “The FCT is known as a centre of unity. If we decide to leave the indigenous issues to only the indigenous people, we would not be doing justice to them.

“The FCT, the geographical location we have the SEC today, is not the first place we have had as our national capital. As you are approaching Lagos, you will understand that this is significant to the people of Lagos state. But, in coming to Abuja at the city gate, there is nothing that depicts the fact that there are people who own this land.

“We have 36 states and the Federal Capital Territory, yet you have people represented from the 36 states on the Federal Executive Council and there’s not one person from the geographical location called the FCT.

“It’s important that when people sit around the table and are able to portray and put forward their issues passionately because it’s coming from the person who is experiencing it.”

Earlier in his remark, the Executive Director, Resource Centre for Human Rights & Civic Education, CHRICED, Dr. Ibrahim Zikirullahi, decried what he described as ‘continued marginalization’ of original inhabitants of the Federal Capital Territory (FCT), saying the Federal Government had done nothing to stem the rot.

His words: “As we have always noted, it is one of the many paradoxes of the Nigerian situation that the original Inhabitants, whose lands were parceled out by virtue of Decree 6 of 1976 to make room for Nigeria’s capital, are being neglected and treated as second class citizens, right in their ancestral homelands.

“It is excruciatingly painful that the Original Inhabitants who made enormous sacrifices to give Nigeria its centre of unity have been rendered stateless and left to wallow in despair and regret.

“A visit to Original Inhabitant communities, just a few hours drive away from the façade of the supposedly beautiful Abuja City Centre, would reveal the sordid underbelly of the deprivation the people are subjected to for those who cannot connect to the stark realities of deprivation being suffered by the Original Inhabitants of the FCT.

“A visit like this would expose the reality of communities without potable water, adequate water, sanitation and hygiene facilities, and dilapidated health and school facilities. The reality of the FCT’s Ols is worsened by the lack of robust representation in the core governance structures responsible for service delivery.

“Unlike other Nigerian citizens in various states who have the right to vote for a Governor and a State House of Assembly, the FCT Original Inhabitants do not have such a right. It is worth noting that, over time, the Original Inhabitants have done everything they could to highlight these obvious issues of discrimination and entrenched injustices that the Original Inhabitants of the FCT face in the political system operating under the 1999 Constitution. The FCT Ols made enormous sacrifices to provide space for Nigeria’s capital.

“Therefore, the State can no longer ignore the voices of the Ols, who have been voicing concerns about their neglect and deprivation for years. Nigeria must remember its commitment under its own Constitution and international human rights instruments to consider and promptly address the plight of FCT Ois.

“Given that FCT Original Inhabitants have faced marginalization and exclusion for decades, addressing their issues requires collective efforts, support and solidarity. This is what makes today’s dialogue a very important one. In many other parts of our country, there is a plethora of issues of indigenous rights, which in some instances have had far-reaching implications for the stability of the country.

“One of the unique qualities of the FCT Original Inhabitants is the fact that they have always relied on peaceful, and lawful approaches to get their voices heard. For this reason alone, the authorities ought to listen to their plights and ensure they have reprieve. It is important for the government not to give the impression that only the violent and unruly can get their attention and have their issues addressed.”

In his goodwill message, immediate past chairman, Abuja Municipal Area Council, AMAC, Adamu Candido, cautioned the Federal Government to as a matter of urgency address the issue in question to avert looming anarchy from the youths.

“Talk to yourselves, don’t think you’re enjoying yourselves. If you don’t solve this problem, they will come after you and if you feel you’re enjoying today, let me tell you, you are murdering sleep because they will wake up while you’re resting with lots of money, they will make you have sleepless nights, because you’re not attending to them and they are angry. Please, let’s provide a solution to this”, Candido opined.

On his part, the Chairman, Council of FCT’s Traditional RulerOna of Abaji, Dr Adamu Baba Yunusa, who was represented by the Galadima of Abaji, Masur Mohammed Sule, pledged his commitment to support the course.