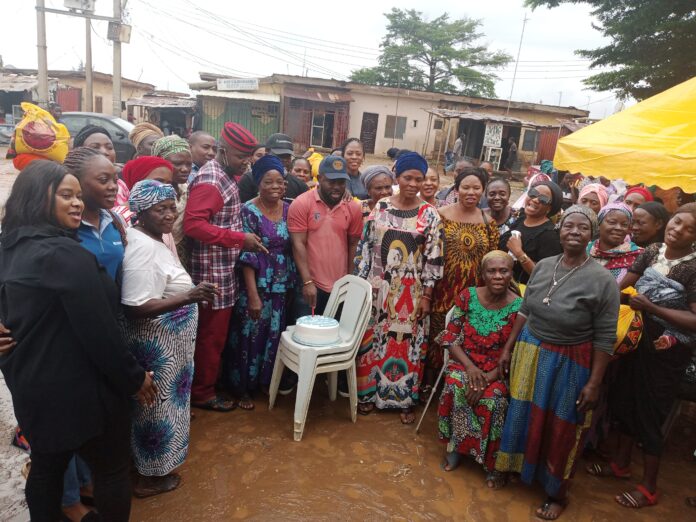 ECOWAS Youths Ambassador and CEO Security Affairs, Austin Peacemaker, on Friday gifted 43 widows, children with food packs and cash gifts to mark his birthday. He explained that he felt the need to use the occasion to celebrate with the less privileged.

During the event in Nyanya area of Abuja, Peacemaker said there was need for Nigerians to look out for the less privileged.

He said: “if God has blessed you, you cannot pretend or claim ignorance of what is going on in the country. A lot of people are suffering. A lot of people don’t know where their next meal is going to come from”.

Peacemaker, who has penchant for touching the lives of the needy, gave out food items, clothes, cash to the widows and scholarships to some orphans.

Most of the beneficiaries had tears in their eyes as they were called out for the money and gifts. They, however, could not stop praying for the ECOWAS Ambassador, Austin Peacemaker.

The President of Rotary Club of Garki 2, Rotarian Adedapo Adesuyi, represented by the President elect Rotarian Judith Gums described the gesture as humanitarian.

She said, Austin Peacemaker is a man that has demonstrated a life of generosity and since he has chosen to celebrate his birthday in a humble way, the club is here to also celebrate with him.

An aged widow, Mrs. Mary Audi who was part of the beneficiaries said she had been living in abject poverty and dejected since her husband died. Life to her had been a twinkle and at a point, hopelessness seemed to have set in because of her continuous suffering.

“Today, I woke up with no hope of food today, but our son, Austin Peacemaker has put a smile on our faces. We shall continue to pray for more blessings on him”.

Another beneficiary, Mrs Christina Sunday thanked the ECOWAS Ambassador, says all that have benefited, should continue to pray for him for more successes.

Austin Peacemaker a security expert who works as a civil-military relations consultant for the Nigerian Army Department of Civil-military Affairs, where he has touched many lives, made positive contributions to Nigerian National Security by successfully creating platforms for military-civil engagement with social media influencers and key state actors across various states in Nigeria, with several tours to the Northeast to interact with frontline soldiers and also visit IDPs with humanitarian assistance.

It is worthy to note that this initiative has successfully helped address human rights abuses and brutality, curb fake news, hate speech and malicious reportage.

Most importantly changed negative narrative and perception from both the military angle as well as the civilian angle.