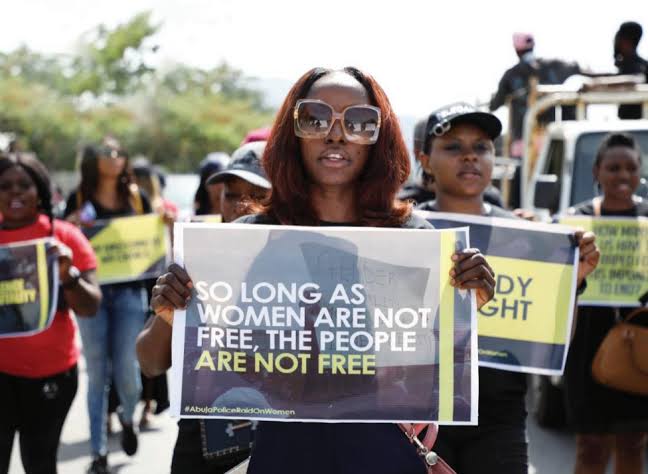 In the face of glaring male dominance and overwhelming domination, Nigerian women have consistently faced limited support in the fight against gender Inequality as gender equality remains a challenge despite some government efforts to address this challenge, Our Correspondent ERE-EBI AGEDAH IMISI writes.

Appears to the over flogged, Issues of Gender equality continues to remain a topic of discussion, a recent Afrobarometer survey findings in Nigeria reveals that women are still faced with different forms of discrimination in their everyday lives from the situation that women are less likely than men to have post-secondary education to the fact that women are less than half as likely as men to say they have control over how household money is spent.

Also support for gender equality is limited, especially among men, and when it comes to hiring, land ownership, control over key assets, and participation in household financial decisions, women remain at a disadvantage compared to men. Women are less likely than men to report equal opportunities in hiring, though they are more likely than men to say they enjoy the same rights to land ownership and inheritance.

In Nigeria there is a pattern of inequality which women are faced with, for example citizens in the northern part of Nigeria are less likely than those in the South to say women enjoy equal rights in hiring but more likely to see land rights as equal. While more than six in 10 citizens, 61% say women should have the same chance as men of being elected to public office, many also consider it very possible that female candidates will suffer criticism and harassment.

From this survey conducted by Afrobarometer it is obvious that the lion of gender inequality appears unmovable despite government actions.

A United Nations statistic shows that 70 percent of the 1.3 billion people living in conditions of poverty are women. Also in urban areas, 40 percent of the poorest households are headed by women. Additionally, 50-80 percent of women predominate in food production but they own less than 10 percent of the land. Interestingly, 80 percent of those displaced by climate related disasters and changes around the world are women and girls, sad reality.

Whether deliberate or unconscious, action is needed to level the playing field for women in the society. Until the necessary action is taken and all hands-on decks to fight the bias, gender inequality and deliberate relegation of women to the background will continue to be a bane to sustainable progress in the Nigerian society.

Our Correspondent spoke with Tolulope Adeniran, Gender Advocate and Journalist who explained that society has been rather unfair to the female gender.

According to Adeniran, there is hardly any sector in the country where women are not making a significant impact but when it comes to real leadership positions the women are relegated to the background.

She maintained that years of amplified advocacy to have more women at the top echelon of governance at both the state and national level has met the brick wall for unexplained reasons.

‘‘The National Assembly on March 1, 2022, just few days to International Women’s Day missed an opportunity to give women a break from the grip of discrimination which we have perennially suffered with its rejection of five gender Bills. It did not only send a chill down our spine, it demonstrated how opaque the ninth National Assembly is in the discourse to broaden the horizon for women participation in governance.

‘‘How many of our Newsroom have Women Editors, are we saying the women lack capacity or obviously have been relegated to the background I stand to be corrected’’ she said.

She however called on government at all levels to begin to create avenues and opportunities for women’s active participation, purge itself of fruitless years of male dominance and fashion a society that gives dominance and importance to the backbone of peace, love and unity at our homes who are our caregivers.

After all said, it is interesting to note that the National Assembly has promised to revisit the rejected Bills with the aim of setting a legal framework for a conducive atmosphere for women to live, thrive and contribute their utmost best in the country’s development without their natural configuration as women being a barrier. Until that is done, we will continue to raise our voices against the unbending lion of gender inequality facing Nigeria women.

The survey data is by Afrobarometer is a pan-African, non-partisan survey research network that provides reliable data on African experiences and evaluations of democracy, governance, and quality of life. Eight survey rounds in up to 39 countries have been completed since 1999. Afrobarometer’s national partners conduct face-to-face interviews in the language of the respondent’s choice.