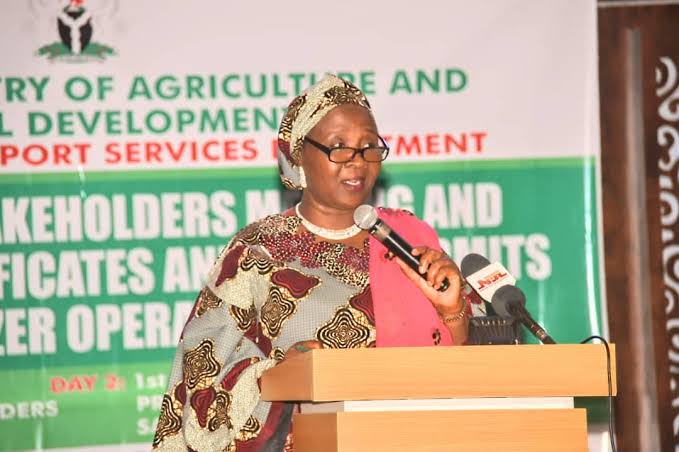 Federal Ministry of Agriculture and Rural Development, FMRAD, has presented Certificate of Registration and sales permit to fertilizer Operators.

The presentation was made yesterday in Abuja by the Permanent Secretary FMARD, Dr Ernest Umakhihe.

Represented by the Director of Special Duties Mrs Fausat Lawal, the Permanent Secretary revealed that the Ministry had trained and deployed to the 36 States and FCT, Fertilizer and Agricultural Pesticides Quality Control Inspectors who were currently working with relevant security agencies to ensure compliance with the provisions of Act and Regulations, in order to protect the farmers and the industries.

He pointed out that non-licensed operators were not allowed to produce, blend, import, market or distribute fertilizers in the country.

He urged the suppliers to ensure that only licensed agro-dealers were allowed to buy their products, likewise to abide strictly and operate within the provisions of the Act and the implementing regulations.

Umakhihe revealed that a grace period of two months has been granted for those who have not obtained theirs as failure to do so will have their facilities sealed off with resultant prosecution, which was to reiterate that the Ministry through its authorized agent will continue to seal premises of fertilizer adulterators as it was witnessed in Kano and Adamawa State once the Certificate of Registration and Sales Permits are concluded.

The Permanent Secretary asserted the Act required that upon fulfilment of all required conditions, fertilizer, suppliers, manufacturers/producers, blenders and importers will be issued with the Certificate of Registration while Agro-dealers (distributors) that fulfil the same will be issued with the sales permit adding that it should also be displayed in a strategic area of their facilities pointing out that the National Fertilizer Quality Control, NFQC, Act was in the process of repealing to accommodate Agricultural Pesticides in the Act.

He explained that the essence was to consolidate and expand the Act, curtail the effect of contaminated foods and address the blending of adulterated fertilizers for the interest of farmers, genuine operators and the protection of environment.

He commended the Federal Government for the National Fertilizer Quality Control Act signed into law by Mr. President in 2019 as well as the implementing regulations that were signed by the Honourable Minister of Agriculture and Rural Development in 2020 require that all companies that would operate in Nigeria must be registered and get the Certificate of Registration and Sales Permit from the authorized implementing authority.

Umahkhihe also stated that it was clear that global food security challenges had worsened as a result of Ukraine and Russia’s conflicts coupled with the issues like instability in the rate of foreign exchange had disrupted livelihoods.

He however pointed out that efforts were on to address the challenges to enhance the food production and food security challenges, particularly those affecting the fertilizer industry.

He further revealed that efforts were being made to source basic raw materials that were not available in the country. Like, Urea and Limestone, NPKs, which are obtained locally while Diammonia Phosphate, DAP, and Muriate of Potash, MOP, were sourced from Morocco and Belarus.

The resultant scarcity he noted, gave rise to the high cost of the raw materials and the price of the corresponding finished products-NPKs but to tackle the issue head-on, the Ministry was working with the relevant agencies to source the two important raw materials locally through the Solid Mineral Development Fund to guide against future scarcity.

Earlier in his remarks, the Director, Farm Inputs Support Services Department, Mr Kwaido Sanni represented by Deputy Director Ishaku Ardo Buba said that since the enactment of the fertilizer regulatory system in 2019, a lot of activities and programmes were designed and put in place as a guide or roadmap to ensure the effective and efficient implementation of the Act the Regulations to achieve its aims and objectives.

He explained further that the implementation process of the Fertilizer Act and the Fertilizer Regulations were flagged off in March 2020 and followed with training and deployment of Fertilizer Quality Control Inspectors to all the 36 States and FCT; provision of Inspectors branded Motorcycles and kits to inspect the facilitate their desired activities.

He restated that the Act and Regulations were not intended to create a stumbling block to the operators’ business but to protect the genuine and entrepreneurs, the farmers, the environment and the entire citizenry from both economic and human losses.

In his goodwill messages, Representative of National Security Adviser, Mr Sunny Okile commended the Ministry for a great event and congratulated all the operators for acquiring legal permits.

He urged them to operate within the provisions of the Act and the Regulations.

Highlight of the event was issuance of certificate and sales permits to companies.