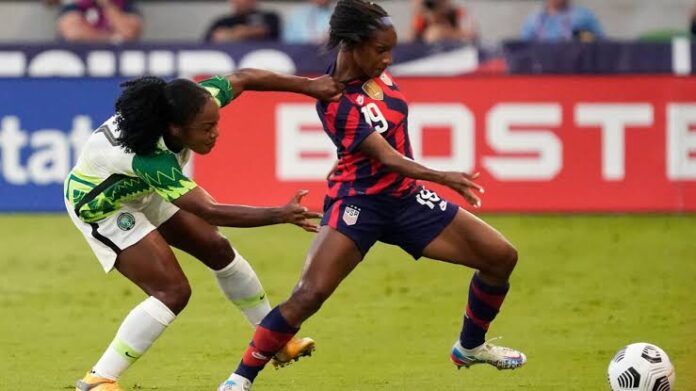 Super Falcons coach, Randy Waldrum has said that Nigerian will see an improved performance from his girls when they file out against the United States Women’s National team today in Washington DC.

Both team are expected to clash in the second of a two-match tour of the United States by the nine-time African champions.

Three-time world champions USA trounced the Falcons 4-0 in the two teams’ first encounter at the Children’s Mercy Park in Kansas City, Missouri on Saturday, with a brace from Sophia Smith and one each by Lindsay Horan and Alex Morgan.

USA and Nigeria have qualified to participate at the 9th FIFA Women’s World Cup finals to be staged by Australia and New Zealand in the summer of next year.

Coach Randy said, “We hope to improve on the performance a little bit on Tuesday (today)..

“You know anytime you played the best in the world that creates a lot of challenges for us but I think everything we do is in preparation for the World Cup.We need to look less on the result but more on how we play. One of the thing I was pleased with is the performance of our young players, they played well in their first time call up game with the best in the world.The good thing is it gives us the chance to see what they have. All the newly invited young players are good. The difference is that we were unable to see them playing for the Super Falcons during the World Cup qualifiers because we got to be careful on bringing them on too soon but now that we have qualified, it is easy to feature in games like this to prepare for the World Cup next summer. It gives us the time to see them in games before the World Cup finals.’’