2023: Trouble for Nigeria if power goes to North — PANDEF warns 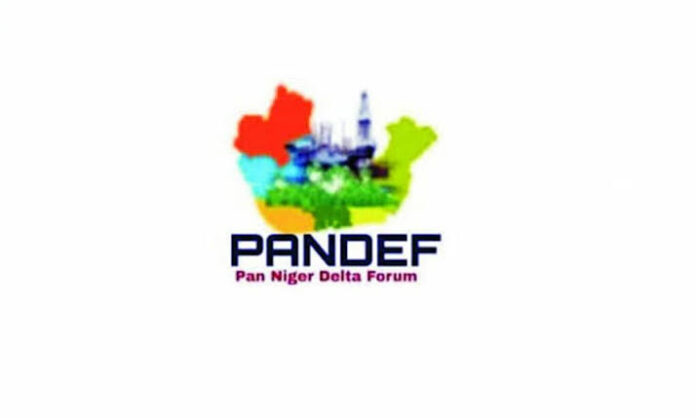 As the 2023 general elections gathers momentum, the Pan Niger Delta Forum, PANDEF, has said there could be problems for Nigeria if power was sustained in the north.

The National Publicity Secretary of PANDEF, Ken Robinson, stated this today when the Forum paid a courtesy visit to the Presidential Candidate of the Social Democratic Party, SDP, Prince Adewole Adebayo in Abuja.

Robinson noted that PANDEF was fully prepared to take its campaigns to every nook and cranny in the Southern region of the country and adviced that all hands must be on deck to get it right come 2023.

This is even as he said PANDEF will moblise every well meaning Nigerian to voice their unjust treatment in the Nigerian state should presidency go north in 2023.

He said, “The statement is not a threat and we are serious. We will mobilise our people in the creeks, in the farmlands, in the streets across Nigeria, and people who think that Nigerians should work together.

“I had said on a programme on national TV that if the two major political parties produce northern candidates, it will be a declaration of war against southern Nigeria. We are in a situation where an administration has operated in a system as if others don’t exist.

“We are saying it’s unfair, not proper, and it’s on record. We are taking our campaigns to the South south, we have friends in the middle belt and in northern Nigeria, we are taking it to Nigerians of goodwill and clear conscience in northern Nigeria, so that they will know that we need to work together for this country to exist, prosper, and become greater than what we are. We will speak to all Nigerians why the next president should come from southern Nigeria; anything otherwise, we are not saying this as a threat, Nigeria will no longer be what it has been if 2023 goes north.”

Highlighting some ‘injustices,’ he said, “There are 17 major paramilitary intelligence agencies in the country. At the last count 14 of them are headed by persons from certain part of the country, three from southern Nigeria.

“The NNPC limited as it is called has 11 key management and board members, the South south has no person, and 80 percent of our resources come from the region, the south east has two, the south west one. And in that kind of discriminating administration of eight years; then somebody in that kind of scenario wants to retain power again in the north.”

On the Muslim Muslim ticket, he said, “You can’t close the door against your own, PANDEF will engage all of them because we’re leaders and fathers.”

Adebayo in his remarks said, he plans to promote an indivisible Nigeria, a Nigeria that believes in power rotation.

He said, “This conversation will continue with the south south and the middle belt. My major aim is to promote an indivisible Nigeria. The Niger Delta has been the source of stupendous wealth that has been used to sustain Nigeria.

“I see the Niger Delta as a valuable component of Nigeria. I just don’t see it as an area that produces oil but as humans who happens to be on oil.