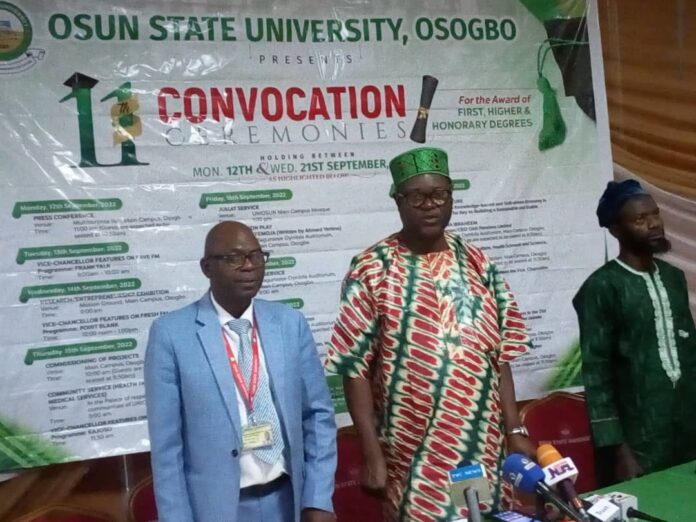 The Vice-Chancellor, Osun State University (UNIOSUN), Professor Odunayo Clement Adebooye on Monday declared that the University management would continue to demonstrate zero tolerance for any nefarious activities by the students, saying is ready at all times to apply appropriate sanctions against offenders.

Professor Adebooye made this declaration while fielding questions from journalists during the press conference to herald the activities of the 11th Convocation Ceremonies of the institution.

The UNIOSUN Vice-Chancellor, said one of the major achievements in students’ welfare is that “we have been able to orientate students to shun drug abuse, sexual harassment, examination malpractices, prostitution and cultism.

Professor Adebooye, noted that the social vices would mar their sojourn in the institution as the authority does not condone such.

Professor Adebooye, explained that obedience to the rules and regulations of the institution by the students is mandatory, while encouraging them to be good ambassadors of their families and the institution.

The Vice-Chancellor, implored the students to be determined, diligent and resilient in the acquisition of their various academic endeavour.

Professor Adebooye said, “this press conference is a yearly ritual and serves as a forerunner of the University’s Convocation Ceremonies and the 11th in its series which is starting with this Press Conference today.
“Following this Press Conference we will continue with series of interesting activities till Wednesday, 21st of September when we will award the postgraduate and Honorary Doctorate degrees”

“I feel on top of the World for this singular achievement. It is my pleasure to inform you that a total number of two thousand and thirty-three (2033) graduands will be conferred with first degrees across the Colleges of the University.