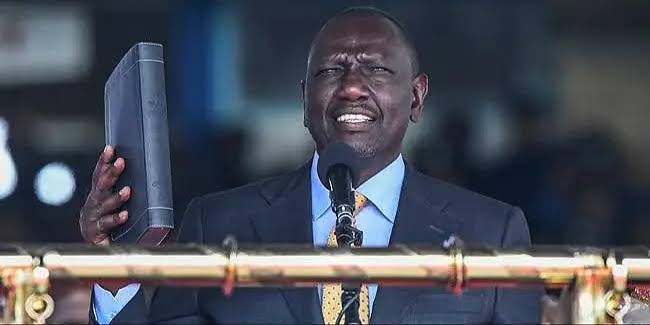 William Ruto was sworn into office as Kenya’s fifth President on Tuesday.

Ruto took the oath of office just after noon on Tuesday, succeeding President Uhuru Kenyatta, who served between 2013 and 2022.

Ruto was handed a copy of Kenya’s constitution and a sword to represent the transfer of power.

There was also a handshake between outgoing President Kenyatta and Ruto, his former deputy with whom he fell out during their second term in office.

Kenyatta had backed Odinga in the election, saying, Ruto was unworthy to serve as President.

Kenyatta however congratulated Ruto on his win only a day before his inauguration, and assured that he was committed to a peaceful transition and urged the new President to serve all Kenyans.

Religion was a persistent theme throughout the swearing in ceremony, with leaders from the Christian and Islamic faiths offering prayers for the new President.

The inauguration comes a week after the Supreme Court upheld an election that dashed the hopes of the nation’s most prominent political families and handed power to a man who began his career as a roadside chicken seller.

Meanwhile, Odinga who lost put to Ruto did not attend, saying as he had “serious concerns” about his opponent’s victory.

Ruto won the election with 50.5% of the vote, to 48.8% clinched by former Prime Minister Odinga.

Odinga has since alleged that the result was rigged, but the Supreme Court ruled that the election was free and fair.