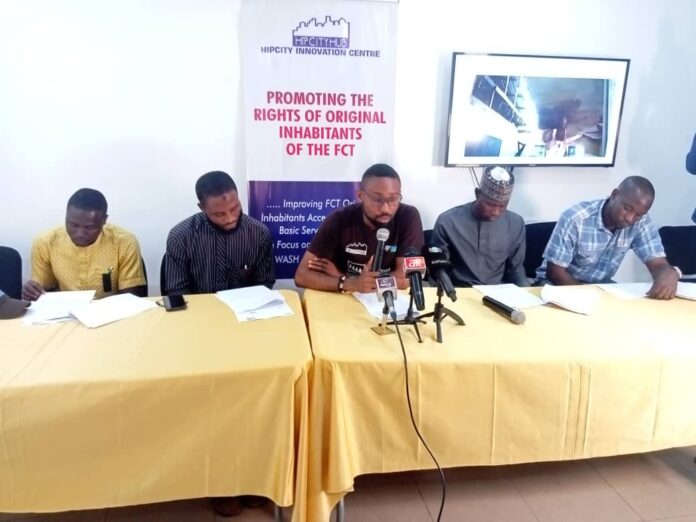 Calls on government to improve sector
Hipcity innovation Centre, a research and advocacy organisation, alongside nine other civil societies organisation has advocated for the rights of Original Inhabitants of the Federal Capital Territory, schools under the Universal Basic Education.

Funded by John. D. and Catherine . T. MacArthur Foundation through the Resource Centre for Human Rights and Civic Education, CHRICED, the major focus of the organisation are to ensure; quality basic education for children in the FCT, provide good service delivery, basic provision of portable water and hygienic and healthy environment.

Speaking at a press brief on Tuesday in Abuja, with the theme, “Promoting the Rights of the Original Inhabitants of the Federal Capital Territory, Abuja, the nation’s capital, Executive Director of the group, Mr. Bassey Bassey, stressed the need to improve on the standard of primary and junior secondary schools across the 17 chiefdoms of the FCT.

He said the organisation had some findings of the dilapidated state of schools, mostly in rural parts of Abuja which require immediate attention from the government.

Bassey decried what he described as the marginalisation of the children of original inhabitants of the city, noting that most of them are from poor homes, who cannot afford to attend private schools.

He recalled that the FCT in August, orderd ordered the shutdown of schools in the FCT over gross insecurity around the chiefdoms and the city centre.

Bassy further called on the FCT Minister to release funds for the 100 schools in 100 days would be effectively implemented and executed in those schools to overhaul those learning institution.

He also stated that the community vanguards who were mandated to report about two primary schools in each of the Abuja chiefdoms with evidences, gave submissions from their various quotas concerning the poor state of those schools in Abuja.

However, while playing the video recorded from Mandate Secretary of Education at the FCT, Sani Elkatuzu, accepted the fact that public schools in the nation’s capital have been levying parents some amounts to cover for whatever expenses known to them but disassociated the government from any form of remittances from vthe schools, as such arrangements are made between the Parents-Teachers Association, PTA.

But he explained, “We are all aware of this and the mandate of the government concerning public schools in the FCT and there is a plan to improve 100 schools in 100 days with plans to solve the issues of infrastructure academic activities in our schools.

“Were only waiting for our budgets to be passed before it comes to fruition.
“The government has met with the Parent-Teachers Association and have noticed that charges on the parents are based on their agreements to complement services of the runnings of the schools by the parents.

“But we have asked our sole administrators to stop asking for anything from those parents but to channel them to the council for approval when necessary, as basic education by the government, is totally free in Nigeria.

According to him, “education equips individuals with the knowledge, skills and technical know-how necessary to thrive in any chosen field of endeavour and to contribute to the growth and development of the society.

There is an extant law on the Universal Basic Education Act (2004) which mandates government to provide free and inclusive basic education for all Nigerian children; however, the extent to which the mandate is carried out, needs much to be desired.

Outlining the basic demands of the organisation, Bassey noted that most of the schools “have some part of their classrooms unfit for use, none of the schools have functional toilets, boreholes or pump for water supply, as debris of broken furniture are visible in those schools, leading to hazards for the children.