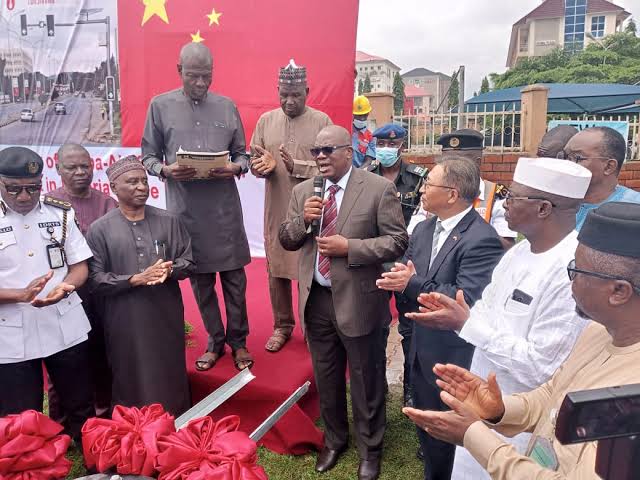 Federal Capital Territory Administration, FCTA, has flagged off construction of wireless led traffic light control signals at 98 major intersections within the Territory, in order to ensure ease of traffic and orderliness
on Abuja roads.

The project, which is part of the donor project powered by Government of the Peoples Republic of China, in addition to other donor projects for the immense benefit of FCT residents.

Speaking at the commencement of the project, yesterday, at Wuye
Market Junction, in Wuye District, Abuja, FCT Minister, Malam Muhammad Musa Bello, said it has added a needed impetus as the government strives towards building a world class capital city.

Represented by the FCT Permanent Secretary, Mr. Olusade Adesola, the Minister expressed hope that on completion, theproject will further
aid efforts by the FCT Administration to achieve an
efficient and effective traffic management system in
Abuja.

“Abuja is one of the fastest growing cities in the world with
an equally fast growing population. This rapid growth has put enormous pressure on city Infrastructure including
those dedicated to Traffic management.

“On our part, we will ensure an enabling environment for a
hitch-free and successful delivery of this project and look
forward to its completion and subsequent commissioning”, he stressed.

Earlier, in a welcome address, Secretary, FCT Transportation Secretariat, Hon. Abdullahi Adamu Candido, on behalf of FCT Permanent Secretary, disclosed that the story of the project started in 2012, during the 4th Ministerial Conference of the Forum On China-Africa Cooperation, FOCAC, when the Chinese Government assented to the request to help the Nigerian
Government construct Solar Powered Wireless Traffic Control Signals at 74 intersections in Abuja.

He said the Solar Powered Traffic light system has proven to be reliable and energy efficient, especially in the face of rising cost of gas in the global market.

“The major challenge is our resolve to own the project and to commit to protecting it from vandalism. As already directed by the Minister, authorized officials to work on the installation would be clearly identifiable.

“I therefore call on citizen and residents to rise to protect the installations. If you see something unusual taking place, please raise alarm.”

Also, the Project manager, China Railway Eight Engineering Group Co. Ltd, CREC No 8, Jiang Kai Fong, added that the firm designated by Chinese Government to implement the 2d Phase of the traffic light project, gave an overview of the project.