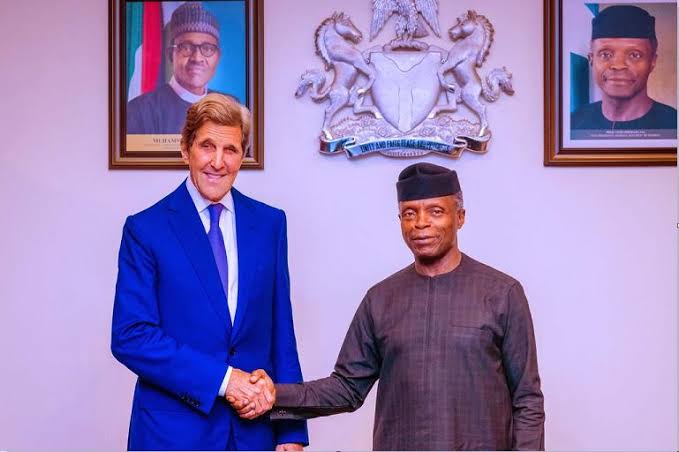 Vice President Yemi Osinbajo has said use of gas as a transition fuel would not only help in stemming deforestation, it would also advance Nigeria’s broader development goals because the country has one of the largest gas reserves in the world.

This was even as the United States (US) Special Presidential Envoy on Climate Change, Mr. John Kerry, in his remarks praisesed the plan and also for the efforts already being made in Nigeria to step up the use of renewables, especially solar and hydropower, as major components of the energy mix adding that other developing countries would also benefit from the adoption of gas as a transition fuel.

Prof. Osinbajo stated this on Tuesday night when he received at the Presidential Villa, the US Special Presidential Envoy on Climate Change, Mr. John Kerry, who was on a working visit to Nigeria. Prior to his meeting with the VP, Mr. Kerry had also met with President Muhammadu Buhari.

Speaking at the meeting with Kerry and the US delegation, the Vice President highlighted the need for Nigeria to continue the exploration and use of gas as a way of arresting deforestation, transiting away from dirtier fuels like diesel, kerosene and petrol, while at the same time ensuring that the country has the necessary energy baseload for industrialization.

Pointing out that Nigeria has one of the largest gas reserves in the world and should benefit from its exploitation, the VP also highlighted the significance of Nigeria’s Energy Transition Plan, which is the first in Africa.

On the call for a review of the Energy Transition Plan, including a discussion about its implementation, both the Vice President and Mr Kerry also discussed the issues of renewable energy sources and the global transition.

While acknowledging that Nigeria ought to benefit from its gas reserves, Mr. Kerry urged an even more rapid adoption of renewables, especially electric vehicles, which are certainly the next wave in auto manufacturing. He observed that the technology of renewables keeps improving daily adding that batteries are already in production which last far more than those that are now in the market.

Upon a request by the Vice President, the Special Envoy promised to assist Nigeria with the necessary expertise to scientifically determine the most appropriate energy mix that will move the country toward the goal of energy for all by 2030 and net zero carbon emissions by 2060, without compromising the country’s energy security.

The US Special Envoy also affirmed the readiness of the US Government to assist Nigeria in a bilateral partnership to realize its Climate Change adaptation and resilience capacity, thereby consolidating the nation’s place as a model for other countries on the planet.

He added that he looked forward to Nigeria presenting an inspiring position, which will no doubt attract all necessary global support at the upcoming COP 27 in Egypt later in the year.

Mr. Kerry who was accompanied by other US officials including the American Ambassador to Nigeria, Ms Mary Beth Leonard, praised the VP’s leadership in urging the global community towards a just transition and coordinating Nigeria’s efforts on the climate change agenda.