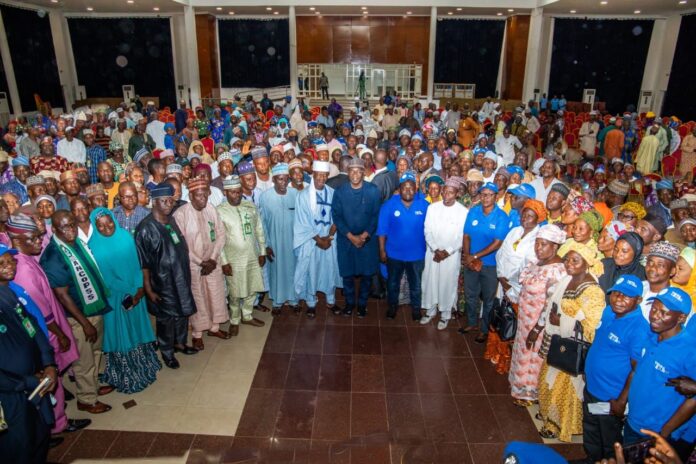 Heads of secondary schools in Kwara State during the week said Governor AbdulRahman AbdulRazaq’s efforts in turning around learning environment and improving welfare of teachers are unmatched in the recent history of the state.

The teachers also commended the introduction of KwaraLEARN which they say is truly impactful, adding that the administration’s interventions have also been spread across every part of the state in a way never seen before.

The school heads made the commendations in Ilorin, the state capital, at an open engagement the Governor held to feel their pulse on government’s focus on basic education and their welfare across board.

The teachers, who acknowledged the improvements in their wages and teaching environment, also called on the Governor to consider restoring boarding facilities which died off a few years ago, end the pay disparities between teachers in basic classes and their senior secondary school counterparts which he inherited, commit more funds to laboratories in the schools, and do more to offset the arrears of salaries he met in 2019.

Speaking Mrs Jimoh C. S. of Junior Secondary School Awonga, Shao in Moro Local Government, said the condition of the school was in a sorry state before 2019.

“l want to appreciate Your Excellency, Governor AbdulRahman AbdulRazaq for the changes you have made in education sector. In the time past in my former school, Government Junior Secondary School, Bode Saadu, the school was in bad state, I don’t even know how to describe the school, all the structures there had been destroyed,” she recalled.

Balla Sa’ad, another principal from Islamiyah College Patigi, described AbdulRazaq as a workaholic Governor who has committed so much resources to improve basic education.

“He is a people’s Governor and a friendly Governor. In fact, in my local government, the slogan now is everywhere you go, AbdulRahman AbdulRazaq’s good works are there”, he said.

Permanent Secretary of the Ministry of Education and Human Capital Development Mrs Mary Adeosun said the Governor has been exemplary in his commitment to education which she said mirrors his passion for the future of the state.

Chairman of SUBEB, Prof Shehu Raheem Adaramaja, described the interactive session as historic in the state.

Adaramaja blamed the longstanding disparity in pay between SUBEB and TESCOM teachers on four factors, out of which two have now been resolved.

He listed the factors to be over-deduction of NUT and National Housing Scheme (NHS) dues both of which have now been addressed and reflected in the teachers’ salaries stoppage of step upgrades for SUBEB teachers since 2016, and non-payment of allowances due to teachers with TRCN. He said these challenges will also be resolved, but called for patience and understanding of the teachers.

The SUBEB boss said training and retraining of teachers has been paramount to the administration, especially with the renewed cordial relationship between UBEC and SUBEB.

AbdulRazaq, for his part, acknowledged all the issues raised by the teachers and said the administration remains committed to total turnaround of the education sector so that Kwara can reclaim its place in the north and Nigeria as a whole.

“We have introduced KwaraLEARN programme and I thank you all for embracing the programme. That’s one of the paths to bringing Kwara back on top in Northern Nigeria and the rest of the country. The investment the government and you are making today may not show immediately but it is something that will speak for all of us later in the future. What you are doing is to produce responsible citizens for Nigeria and the world, and we are grateful for that,” he said

“I have listened carefully to all the issues of promotions, leave bonuses, uniforms in schools, non-academic staff employment, textbooks, harmonization between TESCOM and SUBEB salary, in-service trainings, seminars, security in schools, unity schools and exchange students within the state, equipping laboratories in our schools, water, sanitation and hygiene (WASH) facilities in schools, backlog of salaries, girl-child education, encroachment of school properties and building of shops in front schools. These were part of the issues raised today and we will dissect them and take them one after the other.”