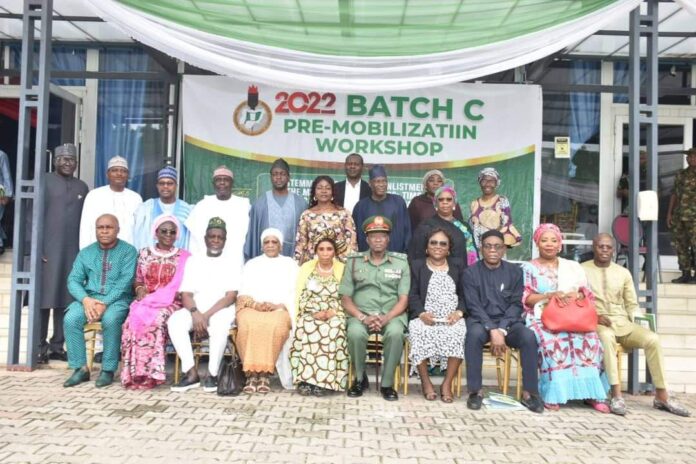 National Youth Service Corps has restated its unwaivering determination to resist any attempted presentation of unqualified persons for National Service, urging all stakeholders to support the Scheme in this regard.

The NYSC Director General, Brigadier General Muhammad Kaku Fadah stated this today in his address during the 2022 Batch ‘C’ Pre-Mobilisation Workshop with the theme; “Stemming Fraudulent Enlistment in the Mobilisation Process: Time For Drastic Action To Arrest the Menace”, held in Abuja.

Fada said there is the need for higher institutions to always ensure that only credible officers are entrusted with the task of handling data of their graduates being processed for mobilisation.

The DG, who decried the declining quality of graduates being presented for mobilisation added that during the 2022 Batch ‘B’ Streams One and Two Orientation programmes, NYSC Field Officers detected a good number of Prospective Corps Members, especially those claiming to be foreign-trained graduates who could not defend their academic qualifications.

“Series of confessions were extracted from them and these will hopefully assist us in carrying our further investigations.

” There is the compelling need for school managers and other stakeholders in education sector to rise to the occasion and nip this problem in the bud”, the DG said.

Fadah disclosed that the Pre-Mobilisation Workshop is a platform for relevant stakeholders to fashion out strategies for the success of the Mobilisation Process.

He, however, said the resolutions made from the workshop would form part of the Scheme’s policy thrust for sustained credibility of the Mobilisation Process.

In her address, the Director, Corps Mobilisation Department, Mrs Victoria Ango said the workshop was an avenue to review previous performances and also bring new ideas to overcome the observed challenges in the mobilisation process.

She said though there is reduction in the mobilisation of unqualified persons which she attributed to numerous innovations through enhanced collaboration with stakeholders, “a lot needs to be done as there are observed gaps in uploads, faking of academic credentials and many other acts of dishonesty”.

The Minister of the Federal Capital Territory Abuja, Alhaji Muhammed Musa Bello while declaring the workshop open commended the selfless services of Corps Members deployed to the FCT.

Bello who was represented by the Director, Social Development Secretariat, Ambassador Asabe Umar promised to deepen the partnership between the FCT Administration and NYSC to deepen it’s lofty objectives.

The NYSC National Governing Board Chairman, Ambassador Fatima Balla Abubakar in her goodwill message promised the continued interface of the board with all critical stakeholders to achieve its mandate and reposition the Scheme for national development.

Also in his goodwill message, the Registrar, Joint Admissions and Matriculation Board,JAMB, Prof Ishaq Oloyede called on Corps Producing Institutions in the county to sanitize their admission process.

Representatives from the National Universities Commission, NUC, National Board for Technical Education,NBTE,and other stakeholders attended the workshop.