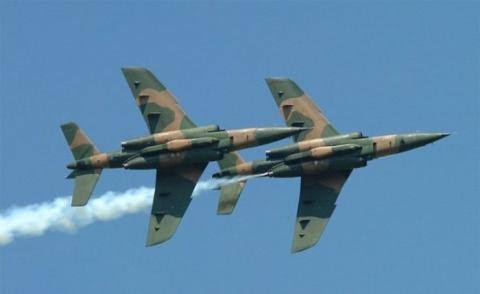 Scores of fighters including relatives of notorious terror kingpin, Bello Turji, have been killed in an air raid carried out by the Nigerian Air Force over the weekend in Zamfara State.

The raid which according to reports was largely successful, was conducted around Turji’s hideout in the Fakai community of Shinkafi Local Government Area of the state on Saturday afternoon.

The terrorists who were attending the naming ceremony of a child at Turji’s house, were caught unawares by the air bombardment.

An Air Force source at the Forward Operation Base in neighbouring Katsina, who asked not to be named as he was not authorised to speak with the media, also confirmed the raid.

According to the senior officer, Turji’s whereabouts remained unknown as at Sunday, while other sources alleged that he escaped with serious injuries.

Also speaking on the incident, a former Councillor in the Fakai community, who spoke to journalists on condition of anonymity, said the terrorists were inside an uncompleted mosque when the soldiers struck.

“I left the community for some personal business in Shinkafi around 1:58 p.m but didn’t reach my destination when I started receiving calls that the community was under attack. My family thought it was bandits that were attacking but then they called to say it was the air force. I could hear the roaring of the jets,” he said.

He further claimed that Turji was not in the town during the attack, and that majority of those killed were his fighters who were inside the Mosque at the time.

“If he (Mr Turji) is in the town, everyone knows because you’ll see his fighters with sophisticated weapons protecting his house. The naming was conducted in the morning while the normal women’s event was yet to start in the evening,” he added.

Another resident told newsmen that the military offensive “was very deadly. I saw the bandits running while we were trying to hide outside the community. Everyone was confused but thanks to God that the jets didn’t stay for long, it would have affected some of us, innocent residents”.

Meanwhile, spokesperson for Air Force Forward Operation Base in Katsina, Abdul Olaitan, had not responded to the incident as at the time of writing this report.

The raid was carried out by the officers from Operation Forest Sanity and air components of Operation Hadarin Daji using Mi 17 and Alpha jet, while another aircraft provided surveillance throughout the offensive, a senior personnel informed.

Turji is notorious for leading his terror group to carry out attacks on communities within the North West region, killing many and kidnapping others for ransome.

Recently in August, the Zamfara State Government claimed that Turji had repented and promised to no longer carry out attacks.