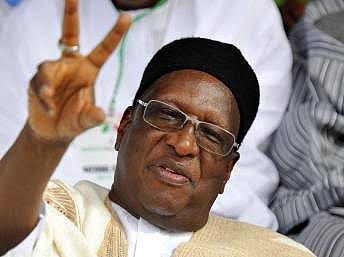 Quintessential Elder Statesman, Dr. Bamanga Mohammed Tukur (BMT) was born on 15 September 1935. He is a prominent businessman and politician who served as Minister for Industries in the administration of General Sani Abacha during the 1990s. He was the president of the Africa Business Roundtable. From March 2012 to January 2014, Tukur was National Chairman of the Peoples Democratic Party, PDP.

Bamanga Tukur was once the governor of the old Gongola State, which encompassed the present Adamawa and Taraba States. He was also a member of the Board of Trustees, BoT of the PDP.

He came to national attention in the mid-1970s, as the general manager of the Nigerian Ports Authority. It was a time the agency was having problems with congestion as a result of a massive cement importation scheme that was started at the twilight of Yakubu Gowon’s administration. During his tenure, the government built a few more seaports to ease the transaction cost associated with shipping and to ensure adequate facilities for Nigeria’s import and export needs.

In 1982, he left his position as general manager and soon contested the Gongola gubernatorial race, which he won. Tukur served as governor for three months before the democratic administration was curtailed by a military coup. After leaving the Gongola State House, he entered full scale entrepreneurship, and was the founder and chairman of BHI holdings (DADDO group of companies).

Bamanga Tukur serves as the Chair of NEPAD Business Group and Executive President of African Business Roundtable (ABR). From 1975 to 1982, Tukur served as Chief Executive of the Nigerian Ports Authority.

From 1993 to 1995, he served as a member of the Federal Executive Council and Minister of Industry of Nigeria. He is Honorary Life President of the West and Central Africa Ports Management Association, and a member of various Chambers of Commerce in Nigeria.

Dr. Tukur was awarded the Doctorate Degree of Law (Honoris Causa) by Benue State University, Makurdi, and is a fellow of the Nigerian Institute of Transport Technology, Zaria. He also has an MSc from the University of Pittsburgh.

With the support of former President Goodluck Jonathan, Tukur was elected as National Chairman of the PDP, Nigeria’s governing party, in March 2012.

On 15 January 2014, Bamanga Tukur resigned as Chairman of the PDP and later quit active politics after the 2015 general election.