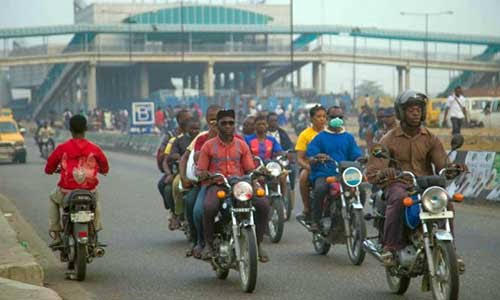 Okada operation was then prohibited in Kubwa and Dutse Communities, and followed by serious mop up by the combined team of task force, headed by the Directorate of Road Traffic Services, DRTS.

As the operations against Okada in Kubwa resumed, the administration said the resurgence was a serious security breaches that cannot be allowed, considering reports by the Police that many abandoned corpses, linked to Okada riders’ recklessness, had been buried by them.

Senior Special Assistant on Monitoring, Inspection and Enforcement to FCT Minister, Ikharo Attah, stated that the resumed operation was a directive from the Minister, Malam Muhammad Bello that the illegalities associated with Okada operation should be dealt with drastically.

Attah noted that reports from the Police that there have been several deaths traceable to Okada riders in the community, due to their recklessness and mob action, was a development which the administration would not tolerate.

According to him, Commercial motorcyclists is not allowed both in Kubwa and Dutse Communities, and those who violate it will be punished by seizing the bikes.

He disclosed that the operation will continue until sanity is restored in the communities.

“Okada operation is not allowed in Kubwa and Dutse . With the strong synergy between the FCTA and Bwari Area Council, following there request two years ago. The operation will continue as so long until sanity is restored.

“The Security Department of the FCTA and the DRTS with the support of the Bwari Area Council after they complained that Okada riders have become menace to Kubwa and Dutse communities. These government agencies at that time cleaned up Kubwa to a point that Okada disappeared completely. Later on we saw a resurgence of Okada and the menace has been very complicated in this axis.

“From what we heard from Police Divisional headquarters of Kubwa is that there had been so much burial, resulting from deaths occasioned by Okada riders recklessness leading to accident or the ones they killed during mob action.

“The Minister, Malam Muhammad Bello during the last executive meeting gave a marching order that all that all components of the FCTA task force should clean Kubwa of Okada because they come to express ways in flagrant disregard of traffic rules, the mess up the roads and commit mayhem.

It could be recalled that FCTA had approved the request of Bwari Area Council two years ago, when it complained that a lot of crimes were being carried out with the help of Okada riders.

The Head of DRTS Operation, Deborah Osho, confirmed that 94 bikes were impounded during the operation and would be sustained.

“About 94 bikes were impounded today from Kubwa and Dutse and the operation will continue,” she said.