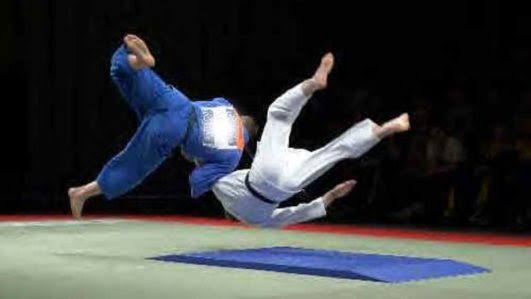 National Judo Coach Ihaza Edokpolor has applauded President of Nigeria Judo Federation Dr. Musa Oshodi for the recently organised coaches/ referees course held in Port Harcourt the Rivers State Capital saying; the programme afforded the participants the opportunity to get abreast with the recent rules and regulations of the sports.

He explained that the course became important because the new rules which was applied at the just concluded Birmingham Commonwealth Games will be used to access athletes at the forthcoming National Sports Festival to be hosted by Delta State.

According to him, the 50 participants benefited immensely from the resource persons who where drawn form the academia and top coaches of the Federation positing that it’s expected the coaches will go back and teach their athletes the new rules.

” We of the Judo family are grateful with what Dr. Oshodi is doing to reposition the game.

“The course coming shortly after the Commonwealth Games where the new rules was applied involved highly rated resource persons including University Dons and top coaches from the Federation enabled stakeholders have a clearer picture of what to expect at international championships and it is expected that the coaches will go back and impact the knowledge acquired to their athletes.

“It’s also important to state that during the programme, there was verification and grading of all black belts and kudos must go to the President of the Federation for single handedly sponsoring the course”, he stressed.

Edokpolor was optimistic that with such regular courses Nigerian Judokas will be well equipped to go for podium finish at international championships just as he appealed to corporate organisations to compliment the efforts of the Federation’s President in moving the game forward.

“You’ll quite agree with me that most times Nigerian athletes fail to make it to the podium at international competitions not because they’re not good but because they’re not conversant with some of the rules which changes from time to time and that’s why I’m happy with the course and say that our President has done well since coming on board.

” It’s also important I appeal to corporate organisations to compliment his efforts and invest in the sports because they stand to benefit immensely from such investment which will also help in making our youths achieve their full potentials and become useful citizens of the country”, concluded the veteran coach.