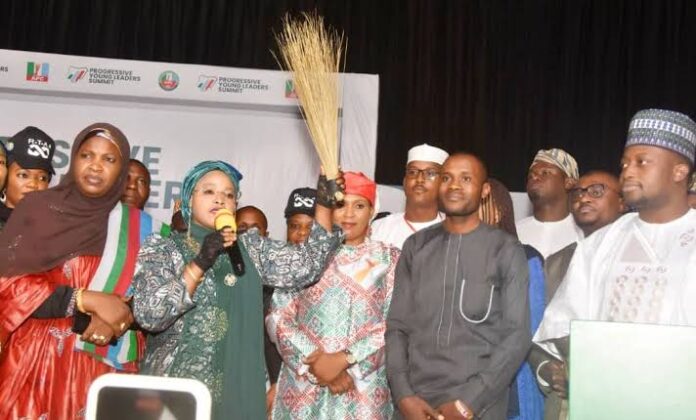 This was made known to Journalists in a press release by the S.A Media To FCT Minister of State, Austine Elemue, on Monday.

While receiving the decampee to the ruling party at the ongoing APC national youth wing summit holding in Abuja, the minister assured all and sundry that the APC is an inclusive party.

Aliyu, however, commended the former national youth leader of the ADP for taking a bold step and for his farsightedness in joining the winning team.

She used the occasion to task him to show others the road to victory come 2023 general elections.

In her words; “I thank you for taking the right decision at the right. However, now that you have seen the light, and by the power conferred on me by President Muhammadu Buhari as Minister of State FCT, I urge you to use your privileged position to show others the road to victory.”

On his part, the National Secretary of APC, Otunba Omisore, thanked the decampee for joining the ruling party, just as he expressed the confidence that Tinubu/Shettima led administration would run a youth friendly government.

While responding, the decampee, Barrister Paul Ogudu, who turned his ADP membership card stated that his decision to join the ruling party was anchored on the principle of fairness, justice and inclusiveness embedded in APC.

He assured that more decampees are willing and ready to join the APC on or before the ban on campaign activities.