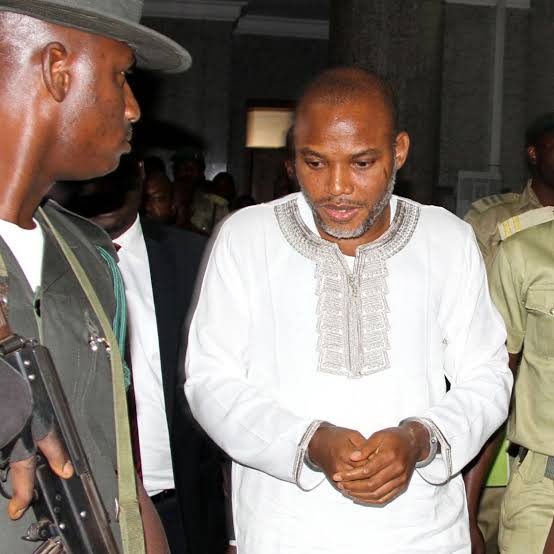 Brother of the leader of Indigenous People of Biafra (IPOB), Nmamdi Kanu, Emmanuel Kanu has raised the alarm over the pro Biafra group leader’s health, saying if Kanu dies in detention, the Department of State Service (DSS), would be held responsible.

Emmanuel told journalists that he visited his brother at the DSS facility in Abuja where he is being detained and what he saw of his health gave him nothing but joy.

“I visited my brother and the leader of the IPOB Nmamdi Kanu yesterday at the DSS facility in Abuja where he is being detained and what I saw did not give me joy”.

The IPOB leader’s brother said it was unfortunate that Kanu would be sick to that level and the DSS would not allow his medical doctors to examine him.

He said several efforts the family has made to get Nmamdi Kanu’s doctors examine him, was rebuffed by the DSS.

Emmanuel gave a note of warning that if anything happens to the Biafran leader, DSS would be held responsible.

He called on all people of goodwill and the international community to put pressure on the Nigerian Government to prevail on the DSS to allow his brother to be examined by his doctors.

“My brother is having a serious stomach problem where he is being detained and he needs his specialist doctors to examine him”, Emmanuel declared.