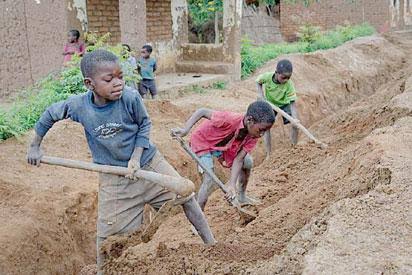 Federal government has taken considerable efforts in dealing with the menace of Child Labour, minister of Labour and Employment has said.

Ngige said this when he delivered his keynote address at the National Children Conference in celebration of 2022 World Day Against Child Labour, held at the Presidential Villa, Abuja on Tuesday.

The Minister said Child Labour has become a scourge in Nigeria, explaining that several children find themselves on the streets, forced to make a living, with others employed in industrial complexes, and hazardous environments.

He said statistics by the International Labour Organisation revealed there are about 15 million child workers as at 2020 in Nigeria, saying in the absence of mitigating strategies, the numbers could increase by the end of 2022.

According to him, this will most certainly have massive implications in the near future.

On the efforts being taking by the Federal government, he said most notably the adoption and ratification of ILO Conventions 138 and 182 on Minimum Age and Worst forms of Child Labour respectively; the passage of the Child Rights Act into law to domesticate the Convention on the Rights of the Child, with adoption by about 30 state governments.

Others are the implementation and enforcement of National Action Plan on Child Labour, Prohibition and Elimination of Forced Labour, Modern Slavery, and Human Trafficking in workplaces spearheaded by the Federal Ministry of Labour and Employment.

he said, also the National Steering Committee, as well as State Steering Committees, and Desk Officers on Child Labour were established at all levels of government and institutional levels to translate the provisions of the 5-year National Action Plan. In spite of all these, we require more collaboration and partnerships to confront the task ahead of us.

He said, “This year’s theme tagged ‘Universal Social Protection to End Child Labour’ is essentially a call for more investments in social protection systems in order to create a strong protection base that will keep children away from Child Labour. As we reflect on the progress being made so far, let us also not lose sight of the importance of providing safety nets for children in vulnerable conditions.”

Earlier in her opening remarks, the Permanent Secretary, Federal Ministry of Labour and Employment, Ms Kachallom Daju, hinted that social protection is a topmost need in the present day of Nigeria as a result of present economic hardship and insecurity bedeviling the country.

“It is a globally accepted fact that Social Protection programmes reduce family poverty and vulnerability, thereby diminishing key drivers of Child Labour. It helps families to cope with economic and health shocks, reduces Child Labour and facilitates schooling. A society that neglects the child has not only traded off its future but more importantly its values and glory. Such a society would, in just a matter of time, lose its identity. It is about the future of these children and the future of the country”, she said.