Flood sacks over 400 homes in Langtang North LGA of Plateau 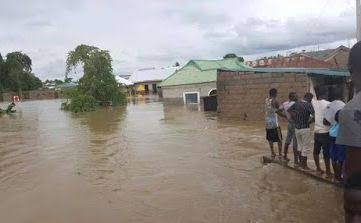 About 400 houses have been submerged by flood in some parts of Pilgani District of Langtang North local government council of Plateau state following several days of rain in the state.

Our correspondent reports that the areas mainly affected include,Zamadede,Shilur,Pishe ,Agwangani,Galang and several other communities .

Everything we had in our house has been destroyed, said Nantip Mallam,a resident of Zamadede village .

He further added that over 200 persons are currently displaced following the unfortunate incident .

When contacted the Executive Chairman of Langtang North council Barrister Rimven Zulfa ,said “we received reports of the flooding in the communities and would look into it and ensure that the necessary agencies are contacted so that succour would be provided to our people .”

He lamented the situation and said ” We are still appealing to people living in flood-prone areas to please leave, as the danger of flooding is not yet over.”

He stated that his administration would continue to prioritise the interest and welfare of the people of the local government area, whose mandate he holds in trust, in line with the vision of Governor Simon Lalong .

“We would work out modalities to tackle flooding in our rural communities , Barrister Zulfa further added .