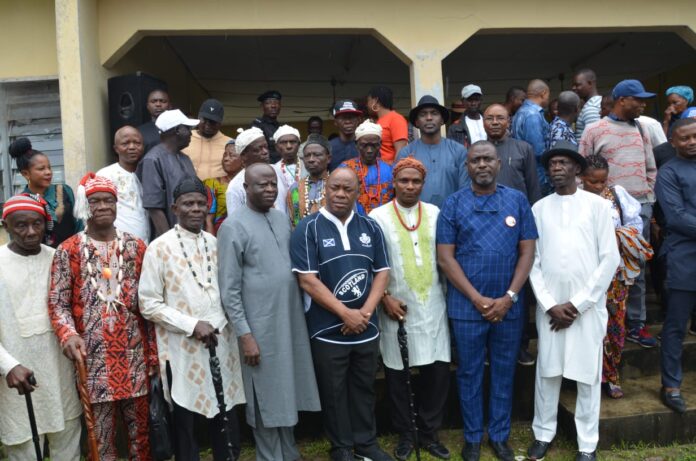 Ministry of Niger Delta Affairs has announced plans to establish medical centres across rural communities in the Niger Delta region.

A statement made available on Wednesday by Deworitshe Patricia, Director Press and Public Relations of the ministry, informed that the Minister of Niger Delta Affairs, Umana Okon Umana made the promise recently while speaking during a medical outreach in Nsit Ubium, Akwa Ibom State.

The minister who was represented by the Permanent Secretary of the Ministry, Engr. Olufunso Adebiyi, said the envisaged medical facilities would give people at the grassroots access to basic but critical modern medical services.

The medical outreach, which was branded ‘Integrated Medical Outreach 2022’, was organized by the ministry for the indigenes of Ikot Edibon, Nsit Ubium LGAs in Akwa Ibom State. Engr. Adebiyi explained that the outreach was an expression of the ministry’s mandate and aspiration to improve the human development indices of people in the region.

“We are working hard to reach out to the grassroots. We’re making another promise that we will try to provide a medical centre for this community so that this community will have at least regular basic medical services,” he said.

He added that such medical facilities would be replicated in communities across the region in a deliberate effort by the Federal Government to build a better Niger Delta region.

The statement added that the outreach programme attracted a huge response from the rural folks, prompting feedback from the ministry’s ecstatic permanent secretary: “You can see the excitement in their faces, you could see the joy. Look at the volume of people here, they abandoned their farmland, that is to tell you how much it touches them and I really appreciate it”.

Engr. Adebiyi further explained that the ministry “is taking positive steps to respond to healthcare needs and other development issues in the region to drive Federal Government’s initiatives that would make lives of the people better in the region.

“We have also approved this programme in four local governments in this state and we will be approving more of such not only for this state but other states in the Niger Delta region”.

The permanent secretary acknowledged challenges facing the outreach programme such as staffing shortages and explained that those limitations were imposed by funding constraints.

Similarly, the Director, Community Development and Education of the ministry, Adamu Sabo, said the plan for the outreach programme benefited from inputs from Akwa Ibom State Ministry of Health and the National Primary Healthcare Development Agency, NPHDA, where the healthcare professionals used for the programme were sourced from.

Sabo reported that more than 1000 people have received help for various medical conditions, including surgeries and eye care, since the outreach programme kicked off.

The Chairman, Nsit Ubium LGA, Arc. Iniobong Orok, commended government for the healthcare programme and promised to make land available for the building of the planned medical facility.