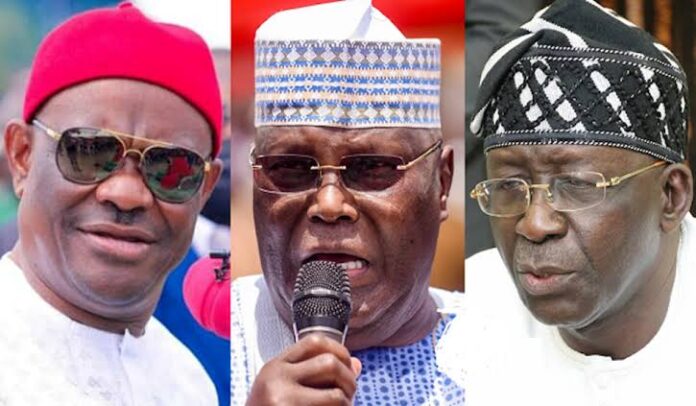 In a bid to resolve the leadership crisis rocking the Peoples Democratic Party, PDP, the party’s Governors Forum has waded into the matter to deescalate the rift between the National Chairman, Senator Iyorcha Ayu and the Rivers State governor, Nyesom Wike.

According to Governor Tambuwal, PDP Governors are discussing among themselves with a view to coming up with a solution to the crisis rocking the party soon.

The Sokoto State governor declared that PDP Governors have engaged with the BoT and they believe that they will come up with a solution to the problem facing the party.

In the words of the Governor: “I will like to thank the BoT Chairman, members and his team for this very important initiative. We all know that the BoT is the conscience of the party and whenever there are issues of this nature, the Board of Trustee steps in, it is part of their functions in the party, constitutionally speaking.

“We have engaged with them and I believe that what they are likely to come up with will be a solution to the problem we have.

“Be rest assured that as governors of the party , we are also talking to ourselves on the way forward and very soon the Governors Forum will meet and we will come up with what we feel should be the solution and the way forward for the party.

“We are all interested in working together for an objective and that objective is for the party and Nigerians of good Will, because we believe we have had enough of the government of APC.

“We are working to send out APC and their government comes May 2023, it is a collective responsibility. Of course we must apply balms, since we all believe that what we have is not good enough, we must work together to solve our internal problems, forge ahead and prosecute the electoral battle and by the grace of God we will have victory”, he said.

Speaking earlier, the Chairman of BoT, Senator Adolphus Wabara, who disclosed that Nigerians will see a more united PDP before campaign starts, disclosed that they (BoT) members are going to meet the National Chairman of the party, Iyorcha Ayu, the party presidential candidate, Atiku Abubakar and also his running mate, Ifeanyi Okowa on the way forward.

He said that the BoT is going round to see how they can find a lasting solution to the problem dividing the party, adding that they have met with some governors of the party, but have not been able to meet the Rivers state governor, Nyesom Wike.

“We are still moving around, in six days time the campaign will be inaugurated. We hope and pray that before then Nigerians will see a more united PDP. We are doing this not for us, not for the Chairman of the Governors Forum or anybody, we are doing this for Nigerians.

N712million Loot:  You Have a Case to Answer, Court Tells Lamido