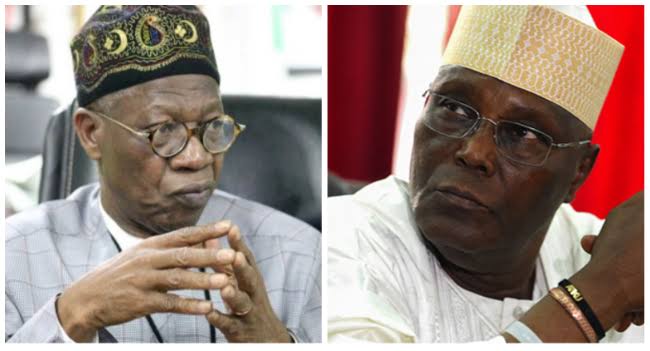 Peoples Democratic Party Presidential Campaign Organisation and the Minister for Information and Culture, Alhaji Lai Mohammed on Thursday engaged in war of words over the state of the Nigerian economy since the All Progressives Congress, APC, came into office in 2015.

PDP presidential candidate, Atiku Abubakar had on Wednesday painted a gloomy picture of the economy while presenting his economic blueprint at a public function last week.

Reacting to Atiku’s presentation, Lai Mohammed declared that the policy documents and proposals espoused by Atiku Abubakar are the version of the economic blueprint of the APC.

Lai Mohammed also declared that the pronouncement by Atiku Abubakar that the future of the country’s economy is ‘bleak’ is sheer scaremongering.

The Minister of Information and Culture during a media briefing on Thursday in Abuja, said while Nigeria may be facing economic challenges, its future is not hopeless.

“The country’s economic outlook is not bleak. Instead, the economy has been resilient, having recovered from two recessions within five years – in 2016 and 2020.

Responding to Lai Mohammed, the PDP Presidential Campaign Organisation said that they have “observed with utmost dismay the very poor attempt by the Hon. Minister for Information and Culture, Alhaji Lai Mohammed to turn truth on its head.

“While the minister was making a barren attempt to catalogue perceived achievements of the current APC administration, he did the unbelievable by claiming that the policy documents and proposals espoused by His Excellency Atiku Abubakar, our presidential candidate, are the version of the economic blueprint of the APC.

“That is a tsunami of a lie!

“To begin with, it has been openly acknowledged that this current administration came into power without a single sheet of paper of what could be called a policy document. Nigerians are aware that in both 2015 and 2019, it took the APC six months and three months, respectively to constitute a cabinet. Perhaps the Minister might be interested in telling Nigerians if it is also part of the APC manifesto to foot drag in forming a government.

“It is on record that the first economic recession that the country experienced in 2016, which happens to be our worst economic decline in thirty years, happened primarily because the APC administration applied what can be called a catch-up strategy to the early signals of the recession.

“That is why till this day, Nigerians are more agreeable to the fact that the tenure of the APC has been nothing but a sheer waste of time, all thanks to the catch-up economic strategy of the ruling party that has left the people more malnourished, sick and disillusioned.

“The poor records of the APC in the areas of economic management, jobs creation, education, security and in virtually all spheres of our national life is the reason why there is a lot of anxiety about the 2023 general election. Indeed, it needs to be stressed that next year’s election will be a referendum on the APC and it is not in doubt that the ruling party in Nigeria will present a global case-study of how a political party can lose popular goodwill within a short period of time.

“Nigerians of all hues, both the rich and those that are not; the educated and those who are not; the elderly and the young are all witnesses to the scandal that the APC has become in the art of governance. Nigerians are rallied in their frustration in the APC and the promise of a better future that our presidential candidate, Atiku Abubakar holds for the country after his victory in the 2023 presidential election.

“What Minister Lai Mohammed reeled out as achievements of the APC is a compilation of the reasons why Nigerians have roundly rejected the ruling party. It’s nothing but a testimonial of failures. Conversely, what His Excellency Atiku Abubakar presented to the organised private sector in Lagos State last week represents the hopes of a new beginning, which Nigerians eagerly anticipate.

“Trying to associate the Atiku policy plans with the failed policies of the APC is the comical height of Minister Lai Mohammed’s aversion for the truth.

“It is contempt not just against the PDP and our presidential candidate, but also to the whole nation. Lai Mohammed must apologize to Nigerians for such insensitive onslaught against truth in broad daylight.”