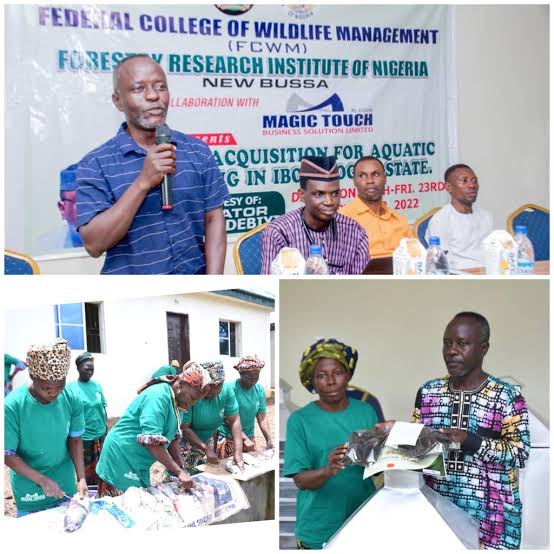 By Kayode Abdulazeez and Palma Ileye

As part of ways to alleviate poverty among people in the grassroots areas, the Federal College of Wildlife Management, New Bussa, Niger State, and Forestry Research Institute of Nigeria, FRIN, have collaborated with Senator representing Ogun West Senatorial district, Chief Tolu Odebiyi, to empower a selected group of 22 rural men and women in fish production and packaging in Iboro community of Ogun State.

The beneficiaries were taken through ethical fish handling, processing, packaging and branding as well as fish marketing and record keeping.

Speaking at the training/empowerment programme held in Ilorin, Kwara State, Provost of the College, Dr. T. A. Ampitan, said that the programme on fish farming and value addition was critical to Nigeria as a nation, adding that fish farming plays a very significant role in ensuring food security, as a rich source of protein in household diets.

According to the Ampitan, who was represented by Dr. Mathias Umunna at the event, he said that it was embarrassing that Nigeria still imports fish for local consumption in spite of huge potentials the nation has in fisheries and aquaculture.

“Fish farming is a means of livelihood providing sustainable income for people involved in the practice. It has a relatively short gestation period thus providing quick returns. Fish farming can effectively be practised in the rural areas hence a way of reversing the rural-urban drift among youths which is prevalent in the country today. Fish is about the most sought animal protein due to its general acceptability, affordability and health benefits creating a huge demand for it,” he said.

He admonished the participants to take the acquired skill seriously considering it as a lifetime opportunity to eradicate poverty and ensure a secured and sustainable livelihood.

He also advised them to utilize acquired knowledge and skill to start a venture in fish farming with the goal of growing it to becoming a big profitable business in the nearest future.

Umunna encouraged the participants to explore various ways to be gainfully employed along value chain of aquaculture such as fish processing, marketing of feed, breeding, fingerlings production and so on.

Also speaking, the senator representing Ogun West Senatorial district, Chief Tolu Odebiyi, represented by Hon. Kolajo Owolabi, said the lawmaker deemed it fit to give his people opportunity to be employers of labour instead of becoming job seekers, adding that he was poised to reduce unemployed populace and improve their income.

He said, “The construction of hall/fish processing house which include abattoir and smoking kiln, in Yewa North Local Government of Ogun state which started in year 2020 has now been fully completed and commissioned by Senator Tolu Odebiyi. The project was laudable and timely. The project has started to bring significant growth and development to the people of the community by training and empowering 22 indigenes of Iboro community in fish handling, processing, packaging and branding as well fish marketing and record keeping. This is aimed at alleviating poverty among the people”.

The Managing Director of the consulting outfit, Magic Touch Business Solution, Kwara state, Mrs. Olukemi Olusola, represented by Mr. Bamidele Nathanael, said that the trainees should see themselves as trainers undergoing training for benefits of other people.

He also said that the entrepreneurship development training was initiated for people who are into fish business or have intention to own and run a sustainable fish processing enterprise.