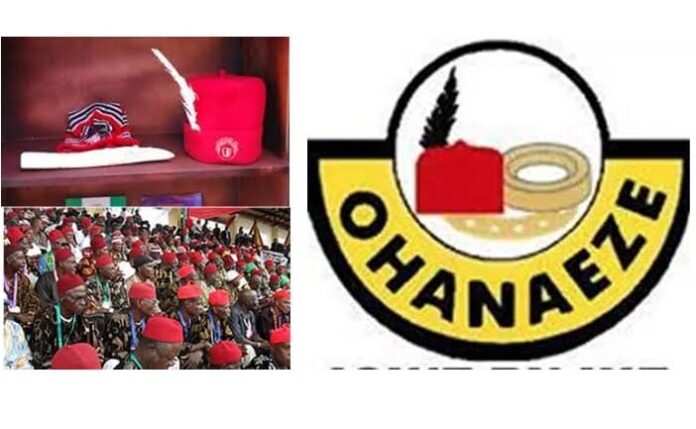 Leadership of apex South East socio-cultural group, Ohaneze Ndigbo on
Wednesday debunked report that it requested for money to support
presidential candidates from the zone.

They declared that the accusation was “most fallacious, mendacious,
and callous of all the falsehoods aimed at tarnishing the image of the
Igbo, and morally reprehensible fabrication from the pit of hell.”

Ohanaeze stated that it has made advocacy visits to many political and
traditional leaders across the country on its own initiative, seeking
support for a President from the South East of Nigeria.

According to the apex Igbo socio-cultural body, among the leaders who
were visited were former President Olusegun Obasanjo, the Sultan of
Sokoto, Muhammadu Sa’adu Abubakar III; E. K. Clark, Ayo Adebanjo,
former President Goodluck Ebele Jonathan, the British High Commission,
and many others.

Ohanaeze said this while denying allegations in a viral social media
video that Ohanaeze Ndigbo demanded payments from one Comrade Kennedy
Iyere in exchange for supporting the campaign for a Nigerian President
from the South East. Ohanaeze claimed that such a thing never
happened.

“Our attention has been drawn to a social media clip making the rounds
indicating that Ohanaeze Ndigbo Worldwide demanded payments from one
Comrade Kennedy Iyere as a condition to support a Nigerian President
from the South East.

“This is the most deceptive, deceptive, and callous of all the lies
intended to tarnish the image of the Igbo as the Judas category that
values money over human conscience.

“On the advocacy for a president from the South East of Nigeria, the
Ohanaeze Ndigbo took the message to all parts of Nigeria; including
former President Olusegun Obasanjo, the Sultan of Sokoto, His
Eminence, Muhammadu Sa’adu Abubakar III; Chief E K Clark, Chief Ayo
Adebanjo, former President Goodluck Ebele Jonathan, the British High
Commission and so many other places.

“Several other Igbo activists and interest groups such as Nzuko Umunna
led by Senator Chris Anyanwu, Arc. Ferdinand Agu, among others, were
also at the forefront of the advocacy.

“On December 13, 2021, I addressed an Open Letter to Asiwaju Bola
Tinubu, reminding him that it is the right of the South East to
produce a President for Nigeria and urged him not to contest the 2023
presidency on the grounds of equity, justice, and fairness. I also
wrote Alhaji Atiku Abubakar, reminding him that the current Igbo
travails are a result of our support for his candidacy in 2019.

“A simple search on the internet will reveal that Ohanaeze had made
numerous press releases urging Nigerians and the international
community to lend support to the quest by the South East for
Presidency. Ohanaeze Ndigbo further propagated the advocacy to the
Southern and Middle Belt Leaders, SMBLF, led by Chief E K Clark, and
Chief Nnia Nwodo as the Coordinator-General.

“Our gratitude goes to the SMBLF for their irrevocable position to
support an Igbo of the South East for Presidency in 2023. Similarly,
we thank Chief Olusegun Obasanjo for receiving us in his Abeokuta
residence about three times. Above all, the Ohanaeze message has found
expression, resonance, and traction in the irrepressible power that is
inherent in the Nigerian masses”.