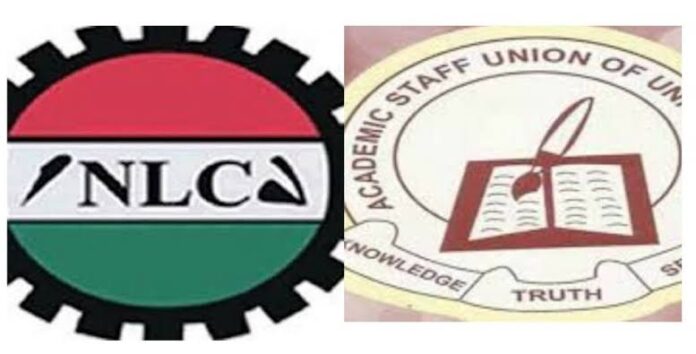 The Nigeria Labour Congress (NLC) has accused the federal government of deliberately frustrating the Academic Staff Union of Universities (ASUU) from submitting its audited financial report in line with the request of the minister of Labour and Employment, Sen. Chris Ngige.

NLC in a letter on Saturday addressed to the minister of Labour and Employment, Sen Chris Ngige explained that ASUU made attempts to submit its financial reports twice but was denied by officials of the Office of the Registrar of Trade Unions.

The letter signed by NLC President, Comrade Ayuba Wabba and made available to journalists urged the Minister to direct the Registrar of Trade Unions “not to be used to execute an obnoxious plot against Nigerian workers especially our lecturers in the universities.”

Wabba said the Registrar of Trade Unions should accept the Annual Financial Report and Audited Accounts submitted by ASUU, saying that ASUU should not be punished for demanding that government respects the Collective Bargaining Agreements it entered with them.

He said, “Our attention has been drawn by the Academic Staff Union of Universities (ASUU) to a letter dated 7” September 2022 written to ASUU by the Registrar of Trade Unions on the foregoing subject.

“The staff disclosed that they were under strict instructions not to accept ASUU’s Annual Financial Reports and Audited Accounts. Later efforts to send the requested union’s financial documents by courier services were equally rejected by the office of the Registrar of Trade Unions. Please find the documents related to the stated facts attached herewith.

“Juxtaposing the unnerving short notice given to ASUU to submit its Annual Financial Reports and Audited Accounts with the unveiled threats by the Registrar of Trade Unions to withdraw ASUU’s Certificate of Registration and the rather callous refusal to accept the same documents upon submission by ASUU ail signpost a very sinister agenda which is capable of destroying the current general harmony in industrial relations in Nigeria.

“The current travail by ASUU appears to resonate with remarks in the public domain that government has perfected plans to proscribe the Academic Staff Union of Universities. If such a plan is true, it would only serve to remind us of the dark years of military rule where unions where proscribed for standing up in defence of the rights of workers.”

The NLC President said the entire labour movement is watching with keen interest the developing situation with the consciousness that an injury to one is an injury to all.

Also in a separate letter to the Registrar of Trade Unions, Wabba explained that due to disruptions occasioned by the COVID-19 pandemic, the union was unable to file these reports immediately the financial documents were prepared and available for filing.

He said, “We also understand that ASUU sent one of their staff and their external auditor to personally deliver the requested financial documents on the 9th of September 2022 but their efforts to submit the documents were rebuffed by your staff who insisted that they were under instructions not to accept any document from ASUU.

“ASUU subsequently sent the requested financial documents through courier services but again the staff in your office refused to receive the Annual Financial Returns and the Audited Accounts from ASUU.

“Given the current stalemate, we write to implore you to use your good offices to accept and file the Annual Financial Returns and Audited Accounts by ASUU in accordance with the ‘provisions of Section 37(1} of the Trade Union Act CAP TI LFN 2004.”