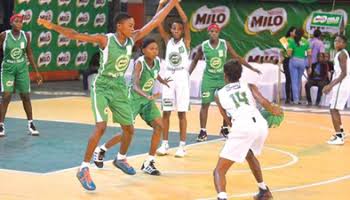 Nigeria’s representatives at the 2022 World School Basketball Championships, Bayelsa’s duo of Bishop Dimieari Grammar School and St Jude’s Girls Secondary School, Amarata on Wednesday in Belgrade, Serbia, began their campaigns on a bright note with victories over Hungary and Turkey.

It was the boys’ team of Bishop Dimieari Grammar School that took to the court early in the day but they did not start well against the experienced Hungarian side.

The final quarter brought out the best in the Nigerian boys, as they raced to the lead from the start to overtake their opponent and took charge of the encounter to win the last quarter by 15 points gap to end the match at 59-52.

Dickson Bumam was the standout player after scoring 14 with one assist, John Wilberforce added a double digit score with 14 as well while Favour Kpee scored 11.

In the girls’ match, the St Jude’s Girls Secondary School team led by Hembam Wandoo showed their class against their Turkish counterpart. The Nigerian girls were not intimidated by the physicality of their Turkish girls, as they dictated the pace of the game from the first to the fourth quarters.

Despite leading in most of the quarters, the Turkish girls came out stronger in the third quarter, but their comeback was thwarted by the Bayelsa girls to end the tie at 48-37.

The team was cheered during the matches by the First Lady of Bayelsa State, Dr. Mrs. Gloria Ebibomo Diri; President of the Nigeria School Sport Federation (NSSF), Mrs. Olabisi Joseph. Also present was the Commissioner for Education in Bayelsa, Gentle Emelah.

In a swift congratulatory message to the Nigerian school teams, President of Nigeria Basketball Federation, Engineer Ahmadu Musa Kida, expressed his happiness on the performances of the boys and girls school teams. He described their opening victories as the key needed to make them perform well at the championship.