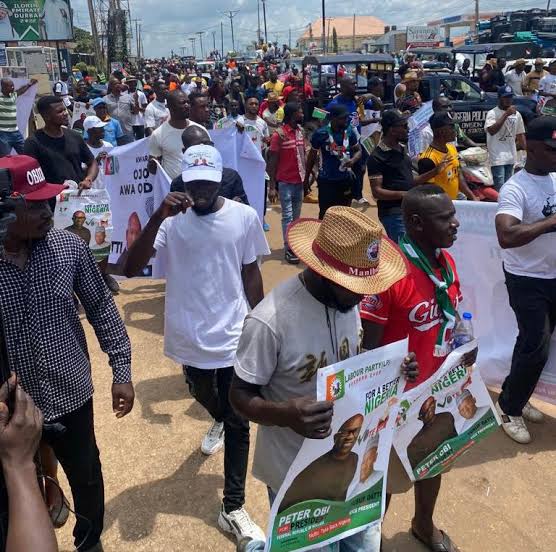 Thousands on at the weekend rallied in Kwara to support Peter
Obi/Ahmed Datti presidential ambition in Kwara state.

The group made up of young people trooped out in large numbers with
branded T-shirts and posters of the presidential candidate and his
running mate march towards Offa-Garage roundabout area in Ilorin,
Kwara state capital.

Speaking with journalists Mr Aloysius Nwora, Kwara State Coordinator
of the Coalition of Obi Support Groups said the rally was in
solidarity with the political aspiration of Peter Obi, a former
governor of Anambra State.

“We are having a health walk in solidarity for our principal, Peter
Obi and Ahmed Datti. The essence of this rally is to counter what is
happening in social media or media generally that Obi has no
structure.

“We want to clear those saying such that Obi has a structure and we
are the structure. They said Labour Party has no structure; we agree
with them because we are not politicians, but individuals with a
passion to make a change in the country through ballot revolution,” he
said.

On the chances of Obi/Datti in the 2023 general election, the
coordinator said “I am not a member of Labour Party and I can’t speak
for them but I can body speak for the movement.

“This movement has covered the whole 16 local government areas in
Kwara state alone and same in other states in Nigeria. “Masses and
youths, in particular, are our real structure and you can see it with
the level of turnout today.”