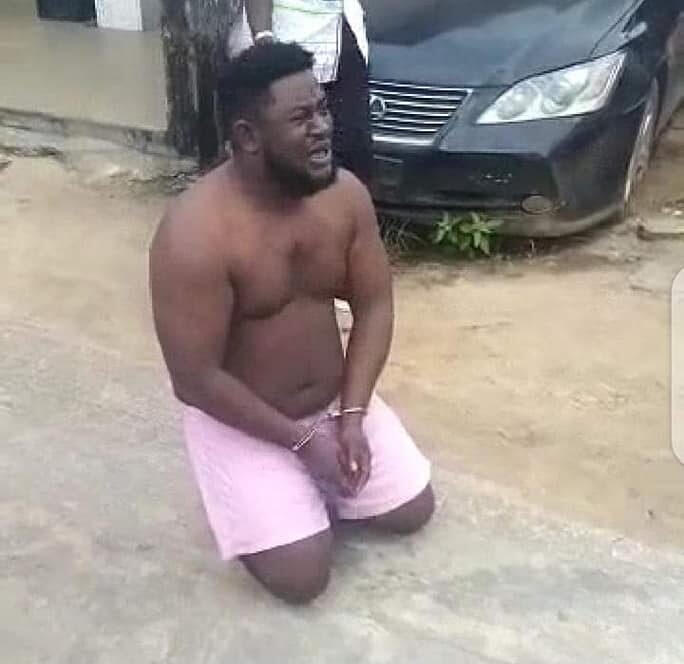 Nigeria Police has arrested one notorious one John Lyon for allegedly involved in high profile kidnapping in Bayelsa state and other part of the country, found over N70Million in his bank account.

It was gathered that John Lyon, popularly called IK- Kpai-kpai, of 36 years old was apprehended after a ₦70 million ransom payment was purportedly linked to his bank account.

His arrest trended on Saturday after he was arrested in Abuja, following a tracking from Bayelsa state.

The suspect is alleged to have been terrorising Bayelsa state for long where he carried out different kidnapping operations.

Lyon, an alleged kidnapper who operates in Bayelsa state, has been was said to have been arrested on Saturday in the federal capital territory FCT, Abuja by officers of the Bayelsa police command.

A video showing the alleged kidnapper being handcuffed surfaced on social media over the weekend.

In the less than two-minute video, Lyon confessed to kidnapping, adding that he only joined the syndicate to carry out two operations.

He was also seen begging for forgiveness over his alleged crime, saying his wife had just delivered a baby.

“Sir, please forgive me. My wife just born self,” he said in a video while shedding tears.

A photo showing on social media shows Lion, wearing a campaign T-shirt of David Lyon, 2019 governorship candidate of the All Progressives Congress APC in Bayelsa has surfaced online.

Lyon is from Bayelsa State, borrn on 22 Dec 1986 was a former staff of Sterling bank, He uses the name Lyon interior hub as a cover up for his many kidnapin activities.

He was recently involved in the kidnp of one Danjuma, a bank staff where he and his men successfully demanded over 50 Million naira and have confessed to having commited the crime. Over N70Million found in his bank account.

He was said to have used his position as a banker to get information about prospective targets.

The ex-banker was also seen posing with some security operatives who reportedly escorted him to a function organised by the APC before the poll.