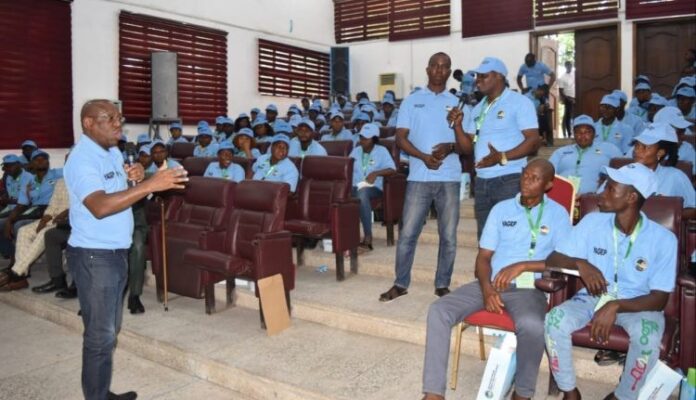 Beneficiaries of the Youth Agricultural Entrepreneurs Programme (YAGEP) enrolled into the 2022 cycle have been charged to use the knowledge acquired during their orientation to boost their farm enterprises.

The Chief Job and Wealth Creation Officer, Prof Eric Eboh, made the call during the Orientation and Farm Enterprise Training (OFET) in Asaba for cassava farmers enrolled in the 2022 YAGEP cycle in Asaba.

The one-day OFET was attended by 145 already existing cassava farmers with a view to making them agricultural entrepreneurs, better managers of resources in more successful and sustainable agricultural businesses.

Addressing the beneficiaries, the Chief Job and Wealth Creation Officer, Prof Eric Eboh, pointed out that the 2022 cycle is the seventh cycle after six successive cycles since the inception of the Okowa-led administration.

He reaffirmed that the Delta State Government has since 2015 trained and established 6,075 youths in various businesses of their choice through its Skills Training and Entrepreneurship Programme (STEP), Youth Agricultural Entrepreneurs Programme (YAGEP) and the Graduate Employment Enhancement Programme (GEEP.)

He emphasized that 1,520 youth farmers have been established or supported through YAGEP in the past seven years, adding that the 2022 cycle was targeted at over 800 beneficiaries, out of which 300 Brown YAGEP beneficiaries would be enrolled into the programme, including this first batch of 145 YAGEPreneurs in cassava production.

He listed the purpose of the OFET to include the enrolment and documentation of the new beneficiaries in the 2022 YAGEP cycle; to familiarize the beneficiaries with YAGEP principles and modalities; and to give training and advice for efficient farm management and best agricultural practices.

He disclosed that the farm enterprise training workshop would be followed with provision of support packages to the beneficiaries such as fertilizer, animal feeds, crop agrochemicals, livestock vaccination and others depending on the type of farm enterprise.

He added that the beneficiaries would be supported with money to pay for critical farm labour in land preparation, weeding, animal husbandry and harvesting as well as tuition in best agricultural practices in farm enterprise management, innovative production technologies and profitable agribusiness.

On his part, the Executive Assistant to the Governor on Youth Monitoring and Mentoring, Mr. Edward Mekwunye, assured the beneficiaries of his agency’s follow-up and mentorship to ensure the success of their enterprises.

Lectures as “Best Practices in Cassava Cultivation, Marketing and Farm Record-Keeping” and “How to Benefit from Nigeria Agricultural Insurance Scheme” were delivered by YAGEP Project Coordinator, Mr. Sam Ndikanwu and the Resource Person from the Nigerian Agricultural Insurance Company, Mr. Patrick Ejeteh respectively.