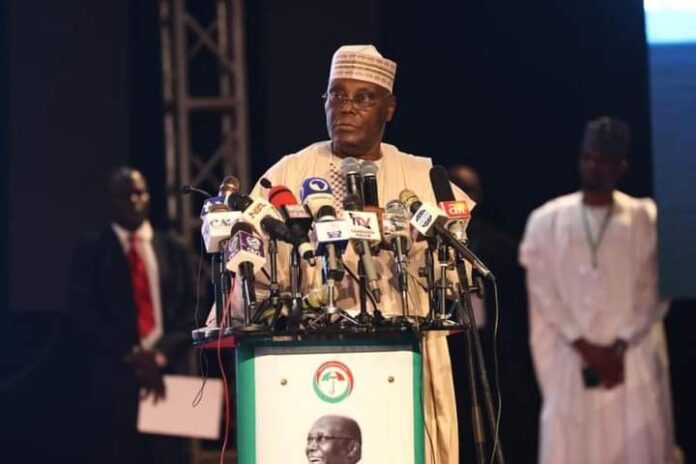 Presidential candidate of the Peoples Democratic Party, PDP, Atiku Abubakar on Wednesday advised Nigerians no to despair as or lose hope as the myriad of problems afflicting the country will soon be surmounted.

Speaking at the inauguration of the PDP Presidential Campaign Council at the International Conference Centre, Abuja, Atiku again lamented the decay in all sectors in the country since 2015 when the All Progressives Congress, APC, came into office.

He declared that the task of rebuilding the country may appear daunting but Nigerians should not shirk in the responsibility of coming together to rebuild the nation.

“Since the loss at the polls of 2019 till now, and under the watch of the current APC government, our dear country has witnessed a frightening descent into anarchy. Our nation is currently in the throes of a multidimensional crisis encompassing insecurity, economic meltdown, disunity and mutual mistrust, to mention a few.

“To start with, the current government has failed at the very essence of what makes a government: the security of lives and property of its citizens. Our security challenges are legion, and I do not need to bore you by rehashing them here.

“Our economy is in shambles, growth has stagnated, and our people are facing massive existential challenges daily. Hunger is the norm today in our country.

“Our nation is in disarray. The fabric of unity that binds our country is, today, being torn apart by mutual distrust, ethnic and sectarian strife and we are now more disunited than we have ever been in our history, including even when we fought a civil war.

“Our educational system is comatose. Nothing more underscores this than the twin embarrassing facts of the number of children that are currently out of school, and the length of time that University students have been kept out of their classrooms this year, as a result of the ASUU strike.

“Our system of government is broken. Our current system is unfair, unwieldy, skewed towards favouring the federal government at the expense of the other federating units, and has in itself, become a willing tool for underdevelopment. This kind of system of government is no longer suited to the challenges of a twenty first century economy that works for everyone and that is needed to bring development closer to our people.

“But all hope is not lost. We have a plan to address these issues and to arrest the drift of our nation. These plans have been laid out in the document titled “My Covenant With Nigerians”.

Also speaking, the Chairman of the PDP Campaign Council, Governor Udom Emmanuel advised PDP members to say no to doomsayers as wind cannot push away rock.

He expressed optimism that PDP will emerge victorious during 2023 general election.

Members of Governor Nyesom Wike’s camp that earlier vowed not to participate in the PDP campaign were all conspicuously absent at the inauguration ceremony.

Appointment of clerk to the National Assembly: A breach of the NASC act, 2014