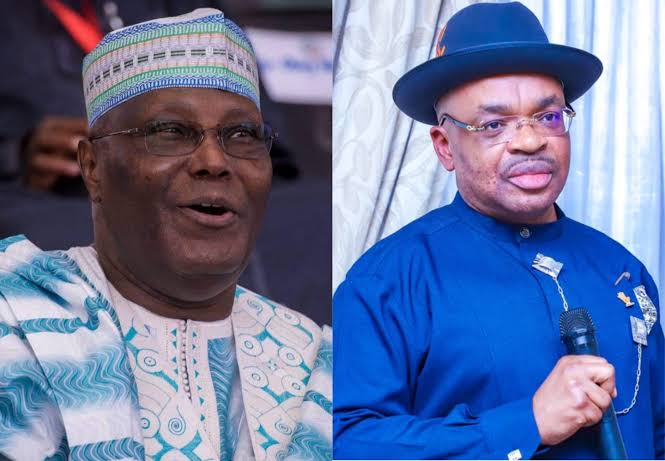 In spite of the crisis rocking the Peoples Democratic Party, PDP, the Chairman of the party’s Presidential Campaign Council, Governor Udom Emmanuel said the party remains a solid rock that cannot be blown away by wind.

Speaking at the inauguration of the Presidential Campaign Council, Governor Emmanuel who is chairman of the council advised Nigerians and members of the party to ignore those speculating disintegration of the party.

“Please don’t mind the doomsayers. We want to assure you that we are campaigning to win. Nothing is acceptable to PDP outside victory for PDP, But this will also require that all of us, we must also work.”

He advised members of the Campaign council to hit the ground immediately.

“If we had made mistakes in the past, we cannot wind down the clock, we cannot recall what passed yesterday, but we can move forward in the spirit of oneness, unity and progress.”

In his own message the Deputy National Chairman, North, Amb. Umaru Damagun, who represented the PDP Chairman, Iyorcha Ayu, said with the inauguration of the Campaign Council, the mission to rescue Nigeria has begun.

“As the window of the presidential campaign opens today, one of the major processes to rescue our beloved country, Nigeria and Nigerians, from the hostile, aggressive and hunger-stricken grief of the APC government is 28th of January, the rescue mission has begun.

“This is an ominous task that must be handed with all sense of patriotism to both the party and the nation. The legacies of our party while in government speak volumes. We can no longer stay by the side and blow our trumpet.”

Also speaking, the Director General of the Campaign Council, Governor Aminu Tambuwal said PDP and Atiku Abubakar are the ones to beat in 2023.

“The PDP and our candidate is the party to beat in this election, it is only for us to work and with God on our side we shall deliver this victory to our party and to Nigerians.

“We have the support of Nigerians and we appeal that INEC will conduct a free and fair election, and victory by the Grace of God will be guaranteed for PDP.”

Also in attendance are PDP chieftains from Rivers State including former Deputy Speaker of the House of Representatives, Austin Opara; Mee Maeba, Senator Geoge Thompson Sekibo and others.