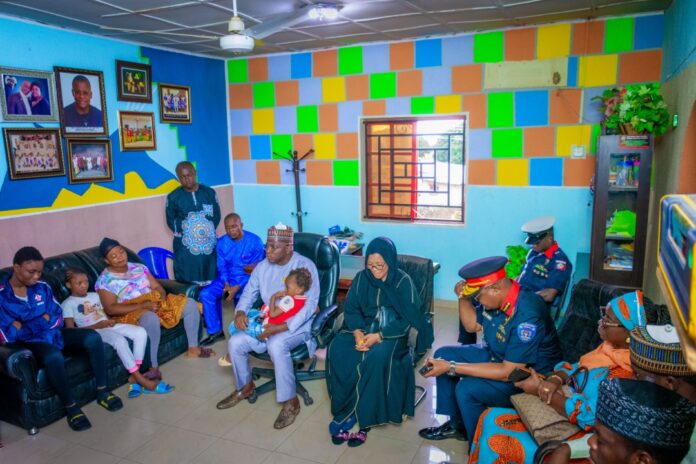 National Headquarters of Nigeria Security and Civil Defence Corps, NSCDC, has been thrown into mourning state following a fatal accident which claimed the life of Commandant General’s lead outrider, Assistant Superintendent of Corps 1 (Asc 1), Dickson Dike who was loved by many.

The unfortunate incident took place on Tuesday 27th September, 2022 in Abuja at about 19.30 hours.

Dickson’s death left many personnel of the Corps, his admirers, colleagues, including top management staff and the CG in rude shock and disbelief that the officer was no more.

Expressing sadness at the demise of the outrider during a condolence visit to his family, Commandant General of the Corps, Dr Ahmed Audi, mni, described Dickson as a very intelligent, dedicated, hardworking, loyal and committed officer who occupied a very special place in his heart.

“Dickson was a very fine officer, he was dedicated and never said no to work anytime he was called upon, he loved his powerbike, he had passion for the job and he would be greatly missed.

“His humility, dedication and loyalty gave him a very special place in my heart, he was very close to my family, so, if there is anyone that is deeply touched by his death, its me,” the CG expressed.

Audi added that Dickson’s death dealt a very painful blow on the entire NSCDC family but he was consoled by the fact that his good nature and humble personality will ultimately guarantee him a place in the blossom of the Lord.

He consoled the wife, children and siblings of the deceased during the visit and prayed for the repose of his soul and God’s guidance and protection to those he left behind.

“Madam, please take heart, your husband was a good man, we will try our best, we will not leave you alone but assist you during this trying period.

“My office is ready to shoulder all the burial expenses and also ensure that his life Insurance and burial benefits are paid as quickly as possible.

“I championed the payment of insurance benefits to personnel when I came on board as the Commandant General in 2021 and Dickson’s case will not be an exception”, he assured.

He described Dickson as a Hero who died in active service and offered his wife, Mrs Peace Adaeze Dickson an opportunity to replace and refill the void left by her husband.

“Dickson was a very proud and committed Civil defender who didn’t joke with his job during his lifetime.

“He was a true Hero and he died in active service, only God knows why he took him, nonetheless, we are with you in this struggle.

“We will take care of you and the children, we will extend our gestures to you to give you solace.

“I will ensure that his space is not left vacant, you are going to replace him and this will help you to continously fend for yourself and the children”, Audi promised.

In the same vein, the President of Civil Defence Officer’s Wives Association, CDOWA, Hajia Aishat Audi who accompanied her husband comforted the widow of the deceased and assured her of the association’s support.

She said “I know how it feels to loose a loved one, talkless of a husband, I want to encourage you to be strong because of these beautiful children and God will see you through.

“It is painful that he left this sinful world at a time when you need him most but rest assured that we will keep you and the children in mind.

“We will not be far from you and I will make sure we support you in our own little way.

Responding on behalf of the family, Pastor Olumuyi Adebayo of SafeHill Prophetic Assembly, Mararaba, thanked the CG and his team for coming personally to comfort the family.

He appreciated the prayers, words of encouragement, moral and financial support and love shown by the Corps to the family.

He described him as a good Christian and dedicated member of their church when he was alive.

He assured of intimating the Corps with burial arrangements once a decision was taken by the family.

Mrs Peace Adaeze Dickson, wife of the deceased expressed appreciation to the CG, President of CDOWA and the entire Corps for the condolence visit and love shown to her husband even in death .

She said that the death of her husband has created a huge vacuum in the family and life can never be the same without him.

Born on the 23rd of October, 1989, Asc 1 Dickson Dike hailed from Udi Local Government Area of Enugu State and survived by his wife and two lovely children.