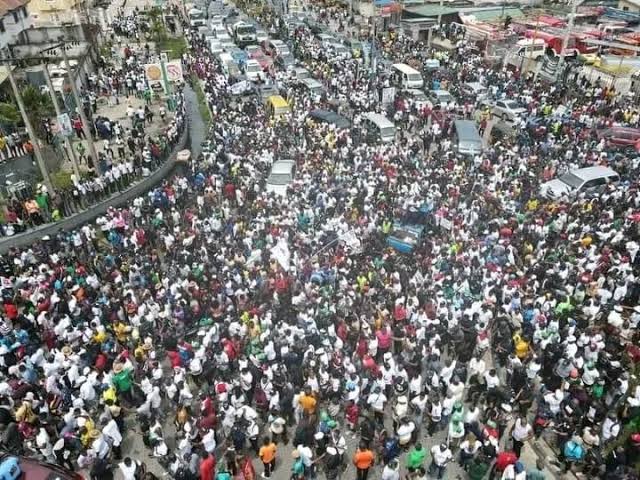 There was intense gridlock on major roads in Uyo on Saturday as the
“Obidient Movement,” supporters of the presidential candidate of the
Labour Party, Mr Peter Obi embarked on a two million peaceful
solidarity rally.

Hundreds of thousands of supporters from over ten different support
groups gathered around the water fountain, along Nwaniba road, the
take off point as early as 8am before moving to Ibom Plaza ,the
centre of Uyo, to Ikot Ekpene road and other major roads in the city.

The gridlock lasted for over two hours in every location the peaceful
crowd which cut accross all class and age moved to, even though
security personnel who displayed professionalism were also on ground
to ensure there was no breakdown of law and order.

Speaking with newsmen a stakeholder in the Obedient Movement, Mr Jude
Anyanwor said the crowd is not a rented one but people who were tired
of the socio economic condition of the country describing the
suffering in the country as unprecedented.

Anyanwor urged the people to sustain the move and ensure that Nigeria
would regain her lost glory by voting Obi in 2023.

”The time has come when everybody should take his/ her destiny in
his hands. We want change in government and it is only Peter Obi that
can bring about the positive change.

“The people who came out for the match, came out of their volition
because they are tired of what is happening in Nigeria and want
‘change’ and better Nigeria which can only come if Peter Obi wins.

Also, Campaign Director, Peter Obi Integrity Network for
Transformation, POINT, Engr Okon Okon expressed confidence that the
former Anambra Governor would emerge victorious in the general
election because of the massive support across the country.

“Today is the independence day of Nigeria, and I can say that today is
the day Nigeria is completely free and independent. As you can see,
the revolution is going on and nothing can stop it.

“Look at the type of people that are coming out to express their love
and passion for our principal. Everything about today is just
dedicated for Peter Obi.

‘We see a divine hand in it, this movement is not ordinary, it
started like a joke and it’s growing like a wild fire we are talking
of 2m man match and you can see the crowd and these two million
people cannot be wrong.” Okon explained.

A physically challenged, Helen Tom, said she was motivated to join the
rally because of her desire to ensure that change is effected.

‘I am from Ikot Ekpene and what motivated me here is ‘change’. I want
a person that knows that people are hungry. I won’t allow my physical
condition to deter me from supporting someone whom I know has the
capacity to change Nigeria from this present condition.

“We need a real change not the change that put us in suffering right
from 2015.” Tom added.

President of Igbo community and Non Indigenes in Akwa Ibom, Dr Sunday
Orie described the crowd as divine urging everyone to show same
solidarity at the election day by voting Obi.

“If it is a rented crowd, how much do you think we can spend on one
person? I see the hands of God in it.

This is not Facebook or social
media as they say. Nigeria will be good again when Peter Obi becomes
the President. The thing there is that it is the people out of
freewill joined the movement.” Orie said.